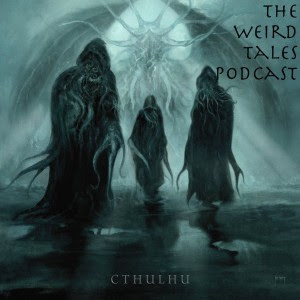 My short story "Unfrozen Eons Drown the Future" is now live on The Weird Tales Podcast! You can listen to it on most podcast services. Check out the details here.

March to Oblivion: The Long Walk by Stephen King 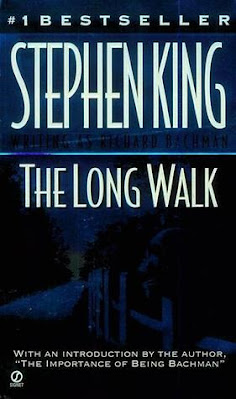 The Long Walk is powerful, engrossing stuff, up there with Pet Sematary in Stephen King's literary explorations of death. I'm glad I finally got to it in my low-key plan to read all of King's novels, and it may be favorite so far of the Bachman books originally published under the pseudonym Richard Bachman.

Like King himself, I take a walk almost every day (although never a "Long Walk" thankfully!). I did an experiment while reading this book: I walked one mile in 15 minutes to get a sense of how fast the characters have to walk (four miles per hour). It's a somewhat brisk pace that only deepened my sense of the stark horror of the novel. Or maybe the real horror is that, much as we try to ignore death or make it an object of entertainment (like the Crowd and King himself to some extent), we're all moving briskly toward death.

Carrie was King's first published novel, but this may be the first novel he wrote; he started it in the late 1960's, and it was published as a Bachman book in 1979. It's the work of a somewhat less polished, less mature writer (some of the prose early on feels a bit more clunky than King's later work), but King's brilliance is still there, as is his honest, unflinching look into the darker corners of human experience.

In a future dystopian America, complete with military dictatorship and Squads that disappear unruly citizens, a contest is held every year called The Long Walk. One hundred teenage boys begin walking at the US-Canada border in Maine, and they don't stop until all but one are dead. If they walk below four miles-per-hour (a brisk pace as my personal experiment attests), they are given a warning. After three warnings, they are summarily shot by soldiers. The winner (i.e., survivor) receives a large sum of money and a Prize of his choice. (Remember: this was written decades before The Hunger Games!)

The science fiction nerd in me wanted a little more information about how we got to dystopia and the history of the Long Walk, but given what happens when Stephen King tries to do info-heavy science fiction (The Tommyknockers, Under the Dome, etc.), maybe it's best some of this is unexplained.

Where King shines, as usual, are his characters and engrossing the reader. We have, in effect, a moving small town in Maine, and the boys are all the types of characters you'd expect from King (one is even wearing a chambray work shirt). There's the main character, Garraty, an all-American, if slightly nerdy, protagonist (perhaps like a young Stephen King), the wise-cracking McVries, the good-natured Scramm, the stoic Stebbins, the cruel Barkovitch, and several more, each more complex than I've explained (but not too many: thankfully King didn't try to introduce all 100 boys!).

I think for me what sets this one above King's other Bachman dystopia (The Running Man) is a more likable protagonist and a wider cast of characters; I cared about these characters and was engrossed in their experience, horrific though I knew it would be for all of them.

And this guides the reader into the deeper themes of the novel. One way to read this novel would be a commentary on the war in Vietnam, which was raging as King started writing the novel and ended not long before it was published. The young men are literally marching toward their deaths after being chosen by the state; nobody is sure why, but everybody is celebrating along the sides of the roads.

But even more deeply, aren't we all on a long walk of sorts? We all know what the destination will be even if we don't know precisely how or when we will arrive. Like the Crowd, we try to take our minds off it, or even make it a form of gruesome entertainment, but the walk goes on nonetheless. King includes a bit of existential dread among the boys here and there just in case you didn't get it, but it's never overbearing (existential, yes, but he's not quite Sartre or de Beauvoir).

You could read this as an engrossing tale of an imaginary dystopia, or you could read it as that and something deeper at the same time. I think King's ability to work so well at multiple levels, of which The Long Walk is maybe the best early example, is a big part of why Stephen King has been successful for almost 50 years. 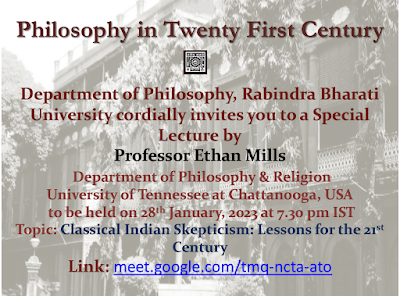 I'm on sabbatical this semester, which means I'm spending more time on the research side of my job. Here are a few professional happenings on that front.

I have a few other things coming up in the new few months, including in-person conferences in Denver and San Francisco. The San Francisco conference will include the inaugural panel of the new Science Fiction and Philosophy Society!

I had to promise my university I would produce a book proposal for a new book project during my sabbatical (likely focusing on Vasubandhu and Ratnakīrti), so I may have details on that in a few months. Stay tuned!

Sympathy for the Devil: Banewreaker by Jacqueline Carey 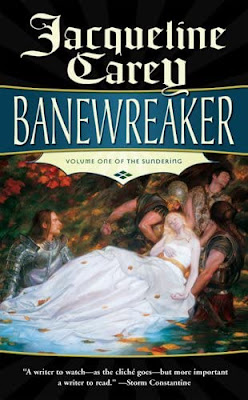 I think I like the concept more than the execution of Jacqueline Carey's Banewreaker, but overall it's an interesting read.

MLK Day and Kindred: History is Still With Us

Today has been another Martin Luther King, Jr. Day here in the United States. In the past I've written posts including "MLK Day 2020: Labor, Love, and Community" and "So You're Going to Quote MLK?"  I thought of the former post a few weeks ago when Republican Congressman Chip Roy quoted King during one of the tragicomic votes for US House Speaker.

This year I attended the 2023 MLK Day Parade and March here in Chattanooga, Tennessee with my union, United Campus Workers. (See photo above).

Chattacon 2023 Is This Weekend!

It's the middle of January here in Chattanooga, Tennessee, which means it's time for Chattacon! This long-running con (it's a few months older than I am!) celebrates science fiction, fantasy, horror, comics, games, cosplay, and all things nerdy every January. It's a small, friendly con (usually a few hundred participants) that I've been attending regularly since 2015. This year it runs THIS WEEKEND, Jan. 13-15, 2023.

And as I have been for the past few years, I will be an official Chattacon panelist! Here are the panels I will be on with links to the panel descriptions:

I will also attend a bunch of other stuff. You can see the full programming schedule on the Chattacon website.  Maybe I will see you there!

I'm always excited for Chattacon, but after an online con in 2021 and the anxiety of the Omicron surge last year, I'm hoping maybe I can relax a bit this year, especially in the best con suite I've ever experienced at any con (they probably can't mention it for legal reasons, but there may be beer and rumors of beer...). The con is asking people to wear masks, but I don't think there's a vaccination requirement this year. Obviously COVID is still an issue (rumors of the pandemic's death have been greatly exaggerated), but our local numbers (even the wastewater testing) aren't anywhere near as bad as they were at this time last year and I'm fully up-to-date on all my vaccines and boosters, so I'm hoping I won't have as much anxiety about attending as I did last year. I'll still test before and after just to be safe and responsible.

Well, I'd better make sure I have some notes for what I'm going to say on the panels, but if you are interested in more information or would like to buy a badge, check out the Chattacon website. 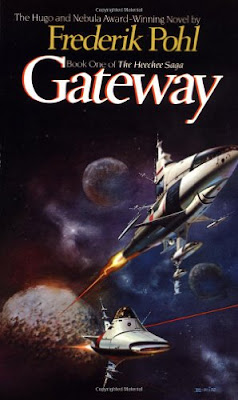 Frederick Pohl's Gateway is a weirder book than I was expecting. I may change my mind after I think some more about what it was saying and what it was lampooning, so let's call this review a draft (technically a third draft).

But before I get into it, a quick news item! I will be discussing Gateway and other classic 20th century science fiction at Chattacon 48 (Jan. 13-15, 2023) here in Chattanooga, Tennessee, where I will be a panelist! Maybe I will see you there to carry on the discussion in person!