March is Women's History Month, so echoing my "Black Future Month" post, this seemed like a good chance to finish two series by two of my favorite authors: Octavia E. Butler's Patternist series and Ursula K. Le Guin's Earthsea series. Okay, so the Earthsea books aren't about the future, at least not our future.

But Le Guin's fantasy may be about my future: I hope to do some serious academic work on both Butler and Le Guin in the future (building on the article on Le Guin I've already published), so maybe this will be a seed of some future project. Echoing a phrase from Le Guin, I might even call it something like Realists of a Larger Reality. 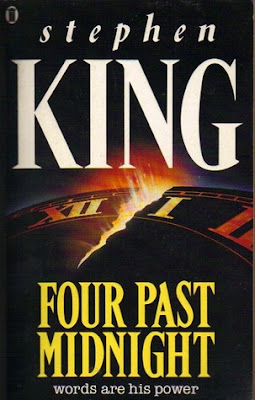 In my long-term quest to read all of Stephen King's books (a quest that feels about as attainable as Roland's Tower), I finally arrived at this classic. Four Past Midnight isn't up there with The Stand or Different Seasons, but it's solid middle-tier King, which is still good stuff. These are technically novellas, but I think The Langoliers and The Library Policeman might really be short novels for King (what would be average length novels for other writers).

No, wait, that's not right. Try this: I wish you a safe and healthy second pandemiversary!