Outside the Boundaries of Reason: The Outsider by Stephen King 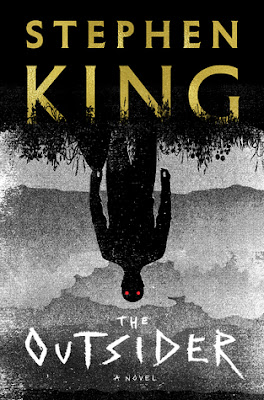 Stephen King's The Outsider makes me interested in things I wasn't all that interested in before: crime fiction and King's previous Bill Hodges trilogy. And it has all the Stephen King goodness we all love: developed characters encountering something otherworldly.

Two Short Kings: The Colorado Kid and Cycle of the Werewolf by Stephen King 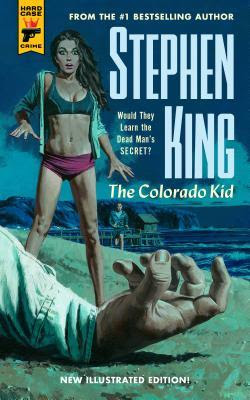 In my perhaps ill-advised and loosely-resolved quest to read all of Stephen King's books, I have come to two shorter ones published over 20 years apart (2005 and 1983). I figured I would review them together on the blog. So here are The Colorado Kid and Cycle of the Werewolf!

I don't know how Stephen King does it, but he took a story of two folksy small town newspaper reporters telling a 25-year-old story to a 22-year-old reporter and turned it into a probing thought experiment on two kinds of stories: those that recount events loose threads and all and stories that wrap things up with a nice beginning, middle, and end. If you think about it, the first kind of story is what really happens in life. And if you think about it some more, you'll see that the "complete" stories where everything is wrapped up are entirely artificial: they always leave some things out or take liberties for the sake of narrative unity.

In The Colorado Kid, our folksy reporters call these news stories versus features stories. I'm also thinking about a distinction used by Noam Chomsky between mysteries and problems. A problem has a solution, or at least a resolution. But a mystery may not. It may go far beyond our cognitive capacity as human beings to understand. It may remain open-ended. Like life itself.

A lot of the so-called "mystery" genre really consists of stories of problems in this sense, or features stories to use the terminology of this book. And if I'm being honest, this is probably why I usually don't care for the mystery genre (and why I have only recently delved into King's forays into more mystery-tinted fiction, but I should have known that King's mysteries would still be, well, Stephen King).

While I understand the appeal of wrapping up a mystery or solving a problem with a nice little bow (maybe precisely because we are usually denied such things in real life), my experience in my decades of existence has taught me that reality is rarely like that. It's simply not true to my basic sense of this universe. Our universe is full of mysteries that we may never solve. This could in some cases be horrifying or disappointing (and King explores those Lovecraftian depths elsewhere), but I prefer the answer that King hints at in this novel and seems to confirm in his Afterword: it is precisely these unresolved mysteries, these loose threads of reality, that make our lives more interesting, perhaps even more meaningful.

Cycle of the Werewolf 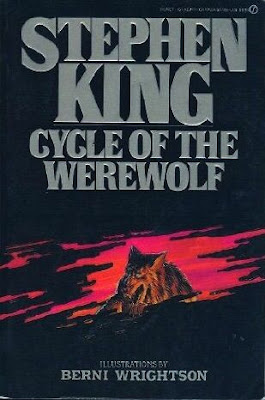 This is a fun little story (maybe a novella, maybe really just a long-ish short story) that was originally based on an idea for a calendar (no, really). It's vintage 80's Stephen King: mysterious murders are taking place in the small Maine down of Tarker's Mills (no relation). And of course the murders take place when there is a full moon each month for a year (so this is a kind of calendar, after all!).

And you get all of this with cool artwork from Berni Wrightson. Honestly the artwork is probably what sells this for me. The werewolf story is solid enough, but nothing all that great within King's larger oeuvre. The movie Silver Bullet is a bonkers expansion of the story in the tradition of the best schlocky 80's Stephen King adaptations.

Like other monsters, werewolves are, from the outside, a reminder of our mortality. Be they werewolves, vampires, Frankenstein monsters, mummies, creatures from the Black Lagoon, etc., monsters are there waiting for us all. You don't know when. But they will get you eventually. In particular, werewolves are a reminder of the duality within us all and a reminder that the more brutal, base side of our nature can sometimes come out unexpectedly.

I hesitate to say "animalistic," because I like animals just fine and think they get a bad wrap. As a werewolf in wolf form, you're just trying to eat, which is little comfort to the victims, I suppose, and a horror all its own.

Still, the real evil in this story is the conscious decision made by the human side of the werewolf character. I won't spoil it, but that, I think, is a common theme for King: the real evil isn't the monsters, it's the people. And what they do with their inner turmoil. That's a far more terrifying idea, ultimately much harder to escape, which is probably the key to King's enduring popularity. (Along with the schlocky adaptations, of course!)