Nondualism and the Pandemic, Part 2

How did the US come to possess such a set of flaws that uniquely predisposed us to react to the pandemic as we have? There are large cultural and political forces that no one of us is uniquely responsible for, but each of us bears some responsibility for. I don’t deign to know your life, dear reader, so let me think through my own example.

Nondualism and the Pandemic, Part 1

A text written by a Buddhist monk 1,000 years ago probably seems like a remote concern in comparison to the pandemic we’ve been living through since March 2020. And of course, that’s true. I’m not going to claim that medical professionals should all stop what they’re doing and pick up ancient Sanskrit texts.

But there is a connection for me personally. When the pandemic was declared in March 2020, I was in the early stages of a new research project on the 11th century Indian Buddhist philosopher Ratnakīrti. I was looking at one of his texts that modern scholars often read as a defense of solipsism—the view that there is only one mind, of which we are all part.

Solipsism is heady stuff (even if there is only one head!), but I wondered if Ratnakīrti’s point might run in a different direction. As a Buddhist philosopher heavily influenced by the Yogācāra tradition and its emphasis on nondualism, I thought that maybe Ratnakīrti’s point isn’t that there is one mind (my mind?) but rather that the very concept of discrete minds totally walled off from one another is an illusion in the context of nondualism, which in turn is a philosophical development of the idea of non-self. If there is no self, separate from the rest of the world, then the very concept of an individual, discrete mind is nonsensical. 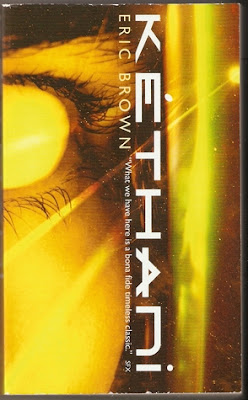 I'm a sucker for stories about benevolent aliens (Clarke's Childhood's End is one of my favorites, and I also enjoyed one of Brown's other novels, The Serene Invasion). Kéthani also includes some interesting thoughts on death and the possibility of immortality. There are a few things that didn't work for me, but overall I really enjoyed this one.