On Marriage: Liberal Celebration? Radical Critique? Why Not Both?

On Friday, the US Supreme Court revealed their decision that all 50 states must allow same sex marriage.  The news was greeted by many, including myself, as a long overdue recognition of basic rights for millions of Americans.  But the decision was also met by some as an expansion of an inherently unjust system.  I also think this group has a point.  Let’s call the first group the Liberal Celebration group and the second the Radical Critique group.  (I won’t engage with conservative religious opposition here; I do think they’re worth engaging, but doing so requires a different strategy).

The Liberal Celebration group (hereafter, “liberals”) consists of many Americans who vote for Democrats, but also many “independents” (whatever that means), libertarians, and some conservatives (I lump everyone together merely on account of their overlapping opinion on this particular issue).  The liberals are right that the expansion of rights for same sex couples is worth celebrating.

As fun as the Doof Warrior is, I want to make a serious point about humor. In the face of the terrible things going on in the world that can easily drive us to depression and despair, humor is one of the few things that can keep us sane.  It might also reveal something profound about the human condition.
Read more »
Posted by Ethan at 5:55:00 PM 5 comments:

The murder of nine people in Charleston, South Carolina last Wednesday is both horrifying and deeply disturbing. I am inclined to agree that this was an act of terrorism.

From here on, I want to specifically address my fellow white Americans, as I did in a previous post, “Nonviolence for White Americans.”

I thought I'd try a multi-media review of reviews focusing on a TV show, a movie, and two books.  There's no music here, although I have written a post on sci-fi music with a second, all metal edition.  Maybe I'll say something about video games in the future (like the amazing Portal games), or maybe I'll discuss other media like board games, roleplaying games, live theater, podcasts, radio, YouTube videos, etc.  So many media, so little time!


I love the Wachowskis.  I'm a big fan of The Matrix.  I also loved Cloud Atlas, based on the excellent David Mitchell novel.  I even defended Jupiter Ascending!  I've also finally been watching J. Michael Straczynski's Babylon 5 (I'm in season three: no spoilers, please!).  When I heard that the Wachowskis and Straczynski were teaming up to make a TV show filmed in several locations around the world, I wasn't sure what to expect, but I had high hopes. 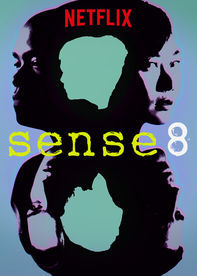 I've watched the first seven episodes, out of twelve in the first season.  (The whole season was released simultaneously on NetFlix - I know, I know, I'm a bad binge watcher.) I'm happy to report that the show has so far lived up to my hopes.  I especially love the diverse cast of characters and international locations.  Especially in the sci-fi/fantasy world, with its diversity-phobic Sad Puppies, it's good to remember that not all humans are American, nor is everyone straight, white, or cis gender.

The deepest philosophical point so far is that we are all connected, but that this connection doesn't erase our differences, either.  Sense8 dramatizes this idea through the idea that the sensates feel each other's feelings and have each other's thoughts.  The American political and moral landscape has turned more to a sort of hard hearted individualism in recent years (and maybe also in other countries, especially those undergoing austerity measures). Given this context, it's refreshing to see something that reminds us of what should be an obvious fact about human beings: we're all in this together.

I have a feeling (and if you're a sensate, maybe you have my feeling, too) that I will be writing more about Sense8 after I finish watching the first season.

Death and Utopia: Reflections on the Culture

As I've promised in some recent posts, here are my reflections on the Culture series of Iain M. Banks.  It's appropriate to post it today, the second anniversary of Banks's death. You can read his final interview here.

The Culture series has become one of my favorite series over the last few years, securing a place in my personal pantheon of science fiction series along with Asimov's Foundation series, Clarke's Space Odyssey series, Herbert's Dune universe, Le Guin's Hainish Cycle, and Butler's Earthseed series.  I wish I had started reading the Culture books sooner!

Aside from the quality of writing and (literally) awesome Big SF Ideas to be found, what I love most is the idea of the Culture itself.  There's far more to be said about the Culture than I could say in one reasonably sized blog post, so let me concentrate on two major issues: utopia and death.  Sadly I won't say much about the subtle humor of the series, although I hope to take up the value of humor in life and fiction in a future post. 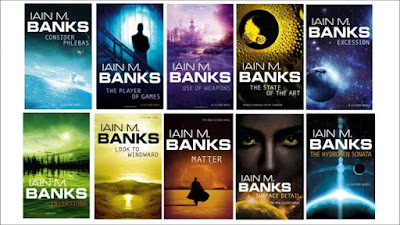