Book/Movie Reviews: A Wrinkle in Time and Ready Player One

There's an old chestnut that the book is always better than the movie, but I'm not sure that's true.  Usually I think of a book and a movie as such different media that it's hard to say which is better than the other.  A book focuses on the creative use of language and has space for character development and background that rarely work in a movie, while movies work directly in images and sound in ways that the printed word can only evoke indirectly.  Nonetheless, I sometimes find it interesting to compare the two to see how a story works differently in a different media.

This spring two movies based on much-beloved books were released: A Wrinkle in Time and Ready Player One.  How did they fare as adaptations?  What did they give us to think about?

42: The Hitchhiker's Guide to the Galaxy by Douglas Adams 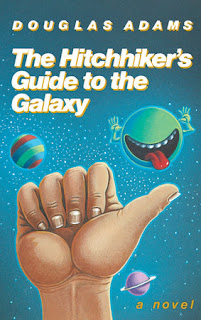 Back when I started this blog in December 2014, I had a lot of ideas for what it might include, and one of these ideas would seem to be essential for any blog on philosophy and science fiction: a review of The Hitchhiker's Guide to the Galaxy!  For the past three and a half years my circuits have been irrevocably committed to composing this review.  I've also been preparing by spending much of that time wearing digital watches.

But considering that The Hitchhiker's Guide to the Galaxy has become a sacred text for science fiction fans, what can my humble exegesis contribute?  Giving up on the pretense of originality, let me discuss a few personal impressions, partly based on having re-read the novel most recently as part of my course on philosophy and science fiction.

The highest praise I have for this book is that it's not just a zany, hilarious read (although there's plenty of zany hilarity), it's also really good, thought-provoking science fiction.  And that's no mean feat - not quite infinitely improbable, but close.  My only real complaint is that Trillian (basically the only woman in the whole book) has almost nothing to do, although if I remember correctly, this changes in the later books.

(Spoilers ahead, but if you can't be bothered to take interest in your local affairs, I can't be held responsible...)

Email ThisBlogThis!Share to TwitterShare to FacebookShare to Pinterest
Labels: 42, Everything, Life, The universe 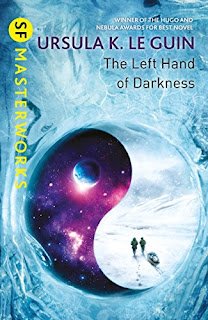 The first time I read Ursula K. Le Guin's The Left Hand of Darkness, I liked it a lot, but realized I didn't completely understand it.  The second time I read it, I loved it, but still thought there was more to understand.  This third time, I've realized that this is not so much a novel to understand as one to experience.

It is impossible to do justice to Le Guin's genius in this humble review.  As a work of literature, Le Guin's writing is beautiful as is her use of mythological symbolism (from myths she herself created).  As a feat of world building, Le Guin's Hainish universe (of which this is part) is as breathtaking as Frank Herbert's Dune or Isaac Asimov's Foundation.  But I don't want to focus on the literary quality or world building here, as amazing as I think they are.

I've written before about how Le Guin was an educator more than a mere entertainer.  Re-reading The Left Hand of Darkness, it occurred to me that Le Guin blurs the line between literature and philosophy as much as anyone ever has.  Putting all this together, let's think of Le Guin as a philosophy professor.