"Then, if in the limitless past, those who were foremost in philosophy were forced to take charge of a city or if this is happening now in some foreign place far beyond our ken or if it will happen in the future, we are prepared to maintain our argument that, at whatever time the muse of philosophy controls a city, the constitution we've described will also exist at that time, whether it is past, present, or future.  Since it is not impossible for this to happen, we are not speaking of impossibilities.  That it is difficult for it to happen, however, we agree ourselves." 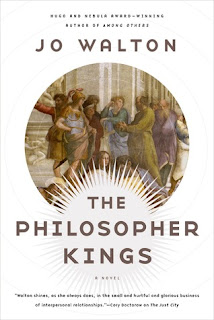 Jo Walton's The Philosopher Kings is a direct sequel to her earlier book, The Just City, which concerns the time-traveling goddess Athena's attempt to set up the city of Plato's Republic in the distant past, all with some help from Socrates and robots!  In my review of that book, I noted that, as a science fiction fan and philosophy professor who regularly teaches Plato, the book was pretty much tailor made for me.  While the same can be said of the sequel, I have to admit I didn't enjoy it quite as much.

The main reason for this: Socrates is gone along with most of his favorite interlocutors: the robot Workers (their dialogues were my favorite part of the first book).  Without Socrates and the robots, the one isn't as much fun.

The sequel takes place 20 years after The Just City ends.  We meet the daughter of Apollo and Simmea: Arete (her name means "excellence" or "virtue," which provides plenty of fun word play).  Arete's story is interesting, but it does turn into typical YA fare of a young girl discovering that she's "special."

Birthdays and Deathdays: Why Birthdays are Worth Celebrating 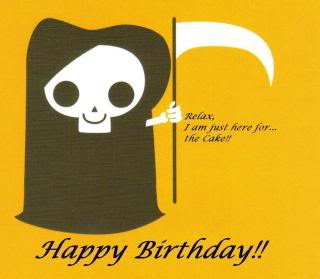 Today is my birthday.  In a world with an unseemly amount of suffering and disappointment (and that’s just high school) I think birthdays are worth celebrating.  Another year older.  Another year wiser, or at least closer to being of an age where people will assume you’re wise. A birthday represents another year of life, but also another year closer to death.

At 39 I’m just about middle aged, statistically speaking.  According to the 2011 US Social Security Actuarial Table I’m almost exactly middle aged with a life expectancy of 39.39 more years.

Is the Believing Feeling Good for Us?: Part Two -- The Self, Dogmatism, and Donald Trump

In Part One I discussed what I called, echoing the band Journey, the believing feeling, the feeling that most of us get when we have certain kinds of beliefs.  But is this feeling good for us? 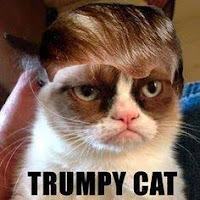 I feel good when I believe that my family and friends care about me and when I believe that I care about them.  Luckily there seems to be pretty good evidence in favor of these beliefs.  Even when the immediately available evidence is questionable (for instance, when we annoy each other), we’re probably better off maintaining this belief for the sake of fostering healthy relationships.

Skeptical Therapy from the Cross-Cultural Trio

The problem comes when the believing feeling makes us worse off, intellectually and morally.

Is the Believing Feeling Good for Us?: Part One

Ours is a culture of belief.  As Journey and Macy’s remind us, belief feels good.  And we like what feels good.  But what feels good isn’t always good for us.  I think there’s something odd, maybe even harmful, about the way we valorize belief and the feelings associated with it.
Of course, these statements need qualification.  I’m talking primarily about the United States and primarily about people’s most deeply held beliefs in areas like politics, religion, and philosophy rather than more mundane beliefs like, “2+2=4” or “Santa Fe is the capital of New Mexico.”

The beliefs that Santa Fe is the capital of New Mexico or that the Earth revolves around the sun probably don’t make people feel good unless they’re lobbyists who like the Southwestern charm of Santa Fe or people with a fanatical interest in Copernicus and Galileo.

For many years I explained my preference for science fiction over fantasy like this: science fiction is an expansive and diverse genre in terms of ideas, setting, scale, and so forth, while a lot of contemporary fantasy consists of rehashing Tolkien without any of Tolkien's genius. 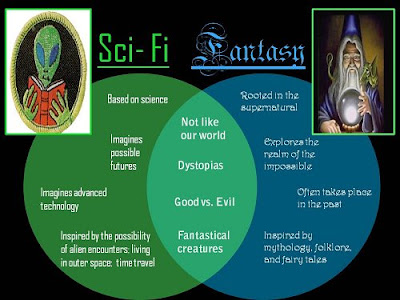 While I still lean heavily to the science fiction side of fandom, I've changed my assessment of fantasy largely as a result of books such as those listed below.  Other fantasy-averse science fiction fans might find these books interesting as well.  (You should, of course, read George R. R. Martin's A Song of Ice and Fire series, but since everybody's either reading those books or watching Game of Thrones, I don't need to say more.)

You might be wondering: What’s the distinction between science fiction and fantasy?  See the first post on this blog for my answer, which draws on Darko Suvin’s definition of science fiction as the “literature of cognitive estrangement.”  Of course, like most distinctions, this one can be blurred.