Black History and Science Fiction: A Review of Reviews

Happy Leap Day!  To celebrate this year's' 29-day Black History Month, I thought I'd collect some of my reviews of science fiction and fantasy by black authors.  So, here's my special Black History Month edition of a review of reviews!


Dark Matter: A Century of Speculative Fiction from the African Diaspora (edited by Sherree R. Thomas)

Anyone looking for a place to start with the history of black science fiction, fantasy, and speculative fiction should start with this excellent anthology.

Skeptical Therapy for the US Presidential Primary Season

Here in the United States the 2016 Presidential election has been going on so long already that we can trace its origin back to the mists of antiquity, back to a time when Jeb Bush was a presumptive frontrunner, nobody felt the Bern, and Donald Trump was a funny joke instead of a terrifying absurdity.  History has finally rolled into the season of primaries and caucuses, where voters start to decide who the nominees of their respective parties will be when the general election finally takes place in November, a day that has been prophesied for generations by the mystical class of political pundits.

The internet is already full of arguments for or against specific candidates: Hillary versus Bernie, Rubio versus Cruz, Trump versus everybody, Carson versus staying awake, etc.  Some of that is good stuff.  You should read it.  But that's not what I'm doing here.

My academic interests in ancient skepticism may seem like a long way from contemporary American politics.  What do people like Sextus Empiricus, Nāgārjuna, and Zhuangzi have to do with people like Hillary Clinton, Bernie Sanders, and Donald Trump?  I think the kind of skeptical therapy offered by ancient skeptics can help those who feel political anxiety about the 2016 election.

I should state for the record that I think you should continue to research the candidates and that my fellow Americans should vote and take part in the political process.  I will be voting in Super Tuesday (March 1) in my home state.  I've decided who to vote for, but that's not what this post is about.  Nor do I mean to start any debates about specific candidates here.  There's plenty of that elsewhere.  My aim is to try to soothe the anxiety created by those kinds of discussions.  Maybe you don't feel like you have that anxiety, or maybe you're in denial about it.  In either case, this post can't help you.  If you find yourself with anxiety about the outcome of primary season, then read on.  There may be something for you here.

If the shelves at my local bookstores are any indication, anthologies of Lovecraftian fiction are all the rage these days.  She Walks in Shadows is a recent Lovecraftian anthology, perhaps the first of its kind, with stories and illustrations all by women.  (I wrote a partial review of this one for my post on my favorite books of 2015). 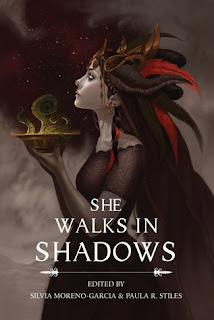 I'm a big fan of Lovecraft's work (see my post, "Weird Knowledge: Lovecraft as Science Fiction and Philosophy").  Few writers have managed to capture the absurdity (in Camus's sense) of our place in the universe like Lovecraft did, and nobody else did it with Lovecraft's eldritch cosmic horror and noisome flights of imagination.

Still, it's no secret that the man himself was a xenophobic racist bigot who didn't like women very much, either.  That's why an anthology like this is so interesting: it uses Lovecraft's own ideas against him in a kind of horrific deconstruction.  Some of the stories give voices to women characters from Lovecraft's canon, while others create new eldritch spaces free from Lovecraft's personal foibles.  Why is this a good thing?  I'll say more on that later, but first the traditional book review bits.

I'm trying this quick post on my phone in my ever expanding quest to utilize blogging technology. I'm at Con Nooga this weekend. It's been fun! As opposed to the cozy smallness of ChattaCon, Con Nooga is a much bigger, much younger, more ComiCon-y event with a lot more anime, horror, and comic fandom participation.

Aside from the large ComiCon-y dealers' room and some music acts, I've been to panels on Dune, Game of Thrones, and Stephen King. There was a panel on philosophy and religion in sci-fi and fantasy, which was surprisingly well attended.  A lot of it focused on the use of religion in sci-fi and fantasy. It was fun! One of my favorite events was a Star Wars versus Star Trek debate!  A Red Shirt was on the Star Trek side, and Admiral Ackbar was on the Star Wars side. (Star Trek was judged the winner by a small margin). See my photo below.

One nice thing about Con Nooga is its emphasis on diversity. I went to a panel on diversity in sci-fi and fantasy, Chattanooga Pride had a prominent table, and the mood of Con goers seemed inviting and open. Is this a sign of the future, especially at a younger Con like this? I hope so. 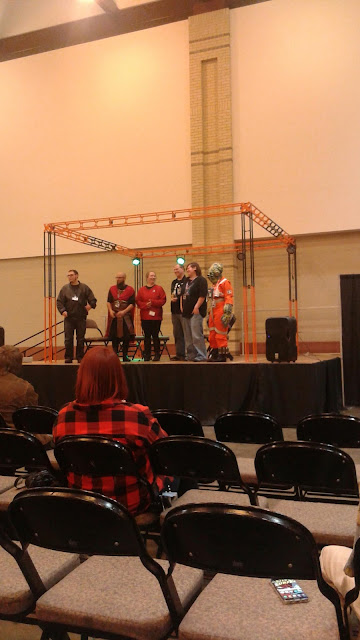 (EDIT: I couldn't figure out how to do hyperlinks on the Blogger phone app, so here's a link to the Con Nooga website.)

(EDIT PART TWO: Sunday was a short day for the Con, but I went to a panel on Orson Scott Card's work and the politics of authorship and an event with actor Eddie McClintock from the TV show, Warehouse 13.  Also, given my experience of Con Nooga as open to diversity, which I should reiterate was my own experience that may not match others' experience, check out this list of links from Jim C. Hines on issues surrounding Mark Oshiro's horrible experience at ConQuesT 46.)
Posted by Ethan at 3:54:00 PM 1 comment:

I thought I’d finally get around to writing about my further thoughts on Star Wars Episode VII: The Force Awakens. You can see my initial non-spoilery reactions here.

I’ve now seen it seven times, which is coincidentally the number of times I saw Episode I in the theaters. While I deeply regret seeing Episode I that many times, Episode VII has gotten better each time. And it has stuck with me. I’m pretty sure I’ll still like it in several years, whereas I soured on Episode I within a few weeks.  Why it took me that long I'm not sure.  Maybe it took awhile for George Lucas's Prequel Death Star to obliterate my childhood.  But, as Maz Kanata might say, that's a story for another time.

This post is in full spoiler mode.  There will be lots and lots of spoilers. If you haven’t seen The Force Awakens yet, two things: 1. What have you been doing?, 2. Don’t keep reading unless you don’t mind major spoilers.  Seriously.  You have been warned.

ChattaCon Reflections: The Importance of Community

For a relatively small city, Chattanooga, Tennessee is graced by several conventions for fans of science fiction, fantasy, horror, anime, etc.  Last weekend I attended one of them: ChattaCon.

This was my second time attending ChattaCon.  Last year I was inspired to write a post, "Aliens are Everywhere (A Post-ChattaCon Thought)."  After attending a panel on aliens, I thought about how the appearance of aliens in SF is really a way of considering otherness more generally: other cultures, other people, even ourselves.

I was trying to think of a similar idea based on something from this year's experience when it occurred to me that the very idea of something like ChattaCon is interesting.  When ChattaCon began 41 years ago, there was no internet and (even worse!) no blogs.  Cons like ChattaCon were an important way for fans to form communities where they could discuss their favorites, learn about new stuff, and meet interesting people.