As a science fiction fan and a philosophy professor who regularly teaches Plato, Jo Walton's The Just City (2015) is pretty much tailor made for me.  I've always considered Plato's Republic to be a kind of science fiction story and studying ancient philosophy is itself a lot like reading science fiction, so this book makes perfect sense to me. 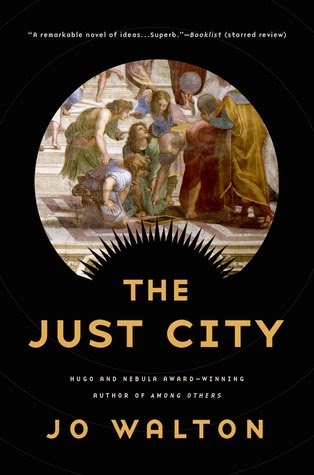 Hard science fiction fans might balk at the inclusion of the Greek pantheon, but I promise if you can get over that and some stuff about immortal souls, this book is well worth it!  Readers whose tastes run more fantastic might not appreciate all the stuff about time travel and robots.  But if you're like me and the ideas of time traveling goddesses and Socrates engaging in dialogues with robots are some of the most awesome things you can imagine, then this book is for you!

You will definitely get more out of this if you've read Plato's Republic as well as some of Plato's other works such as the Apology, Crito, and Phaedo.  If you haven't read the Republic, just get a philosophy major to explain it to you!

For more on the plot and the writing, see my Goodreads review.  Here I'm going to jump to the philosophical bits.

In terms of creating an engaging story, Walton did well to dwell on two of the most remarkable things about Plato's Republic: gender equality and the idea of having spouses and children in common.  The theme of the relation between theory and reality is a big one in the novel, centered largely on these two issues.

On gender equality, Walton gives a lot to consider concerning what she refers to as "equal significance."  Her characters lament (as any decent person should) what we have lost by denying education, career opportunities, and leadership roles to women for thousands of years.  Plato's argument for gender equality shocked many of his ancient readers (like Cicero, who shows up in the novel and is never quite convinced).  However, it's obvious to many people today that being qualified for a job has to do with one's qualifications and not one's gender (in practice, of course, we don't really take it to be as obvious as we think we do).  The story of how equality went from a crazy idea to an obvious one ought to involve Plato, and Walton does a good job of showing how Plato's lofty ideas on equality might be realized, but also complicated by reality.  A lot of the discussion of equality has to do with the business of child-rearing, which leads to the next point.

Those familiar with the Republic will remember that by having spouses and children in common, Plato doesn't have in mind anything like contemporary ideas about polyamory or raising children in a kibbutz.  Rather, it involves a lottery to determine one day marriages purely meant to produce children; after children are born, they are raised in communal nurseries and parents don't know which children are theirs.  The idea, according to Plato, is to avoid the kind of nepotism and favoritism that make for unhealthy societies.  Walton is absolutely spot on in showing how this is probably the most difficult part of the proposal of the Republic, if not entirely impossible for human beings.  I always stress this issue when teaching the Republic.  It's the place where the theory-reality relation breaks down the most.  It seems to Walton, me, and many others that human beings are the kind of creatures who typically, although not always, want to form long term romantic relationships and to know their own children.  Blame it on selfish genes, society, or Disney, but these longings are deep for most of us and not easily overturned.

My only real philosophical criticism is that the novel emphasizes individual rights and personal choice far more than Plato or most Platonists would, although Walton tempers this with the characters' virtue theoretic notion of "making my best self."  Whether Plato meant the Republic as a serious proposal or not - I say not, as do several of the characters in this novel - the basic idea is that the whole society functions best when the individuals are functioning harmoniously both in terms of the parts of their individual souls and in terms of their role in the city.  There's nothing that we moderns would recognize as talk of individual rights or "equal significance" about it.  Maybe this is an unavoidable modern anachronism when thinking about ancient ethics.  Or maybe this is a case of the more contemporary characters convincing the ancient ones, which may be Walton's overall philosophical point.  Maybe she's making the characteristically modern critique that Plato's city forgets the individual in favor of the society, but one which could grow out of the moderns' interaction with the ancients.  It might even grow out of ancient virtue ethics itself: after all, if "making your best self" requires some degree of autonomy to give you room to develop, then maybe "equal significance" grows organically out of virtue ethics.  Perhaps this was Walton's intention all along.  Or maybe I should simply remember that her audience is primarily 21st century science fiction/fantasy fans rather than philosophers, historians, or Plato scholars!

Another criticism is that I wondered why the story was so Eurocentric.  While I understand that the people who get there by praying to Athena after reading Plato might be primarily Western (including North Africa and the Middle East), I don't see why there wouldn't be more people from places in Latin America, Africa, or Asia in the book, especially for the people from our future.  There is one Chinese American professor, but I think Walton really missed a chance to do more interesting cross-cultural things in addition to all the fun cross-temporal things.

Despite my criticisms, I really did love this book.  I recommend it to fans of Plato, science fiction, fantasy, and fun stories.  I will be looking forward to the sequel, The Philosopher Kings, due to be released this summer.