As I've mentioned a few times on this blog, Ursula K. Le Guin is one of my favorite authors.  In The Lathe of Heaven (1971), Le Guin's depth and artistry shine in taking what in most people's hands would be a silly plot about a man whose dreams change reality and turning it into richly textured ruminations on dreams, aspirations, reality, knowledge, and relationships.  It's all the more amazing that she pulls this off in under 200 pages!  (See also my Goodreads review). 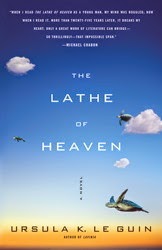 A lot of people (including many book blurb writers and one of the characters) talk about the central dilemma as whether one should "play God."  I don't think that's quite right.  Although George Orr's ability to alter reality through his dreams sounds God-like at first, as he repeatedly explains, he doesn't make the changes consciously and he doesn't control them.  Herein lies the Daoist core of the novel.  It's not about "playing God," it's about acting in harmony with the nature of things, which often means setting aside the will to dominate, to intellectualize, to control.  Those who do not do so are destroyed by heaven, although not necessarily by a lathe!  The title "The Lathe of Heaven" comes from an old translation of the classical Daoist text, Zhuangzi (Ch. 23); Le Guin said in an interview with Bill Moyers that she later learned that this was a faulty translation (see around 8:10 in the the interview below).  It still sounds cool, so I'm glad she didn't change the title.


I do wonder why Le Guin didn't do something with Zhuangzi's famous story of dreaming that he was a butterfly.  Maybe she thought that was too obvious, which is why she's a consummate artist, and I'm a gauche philosopher.

Of course, Le Guin, being awesome like she is, doesn't just preach the Daoist gospel to us.  One of the central conflicts is between Dr. Haber, who wants to know how to use Orr's power of "effective dreaming" to alter reality for the better and Orr himself who is initially quite meek and doesn't want to use his power at all.  There's an echo of this in Orr's relationship with Lelache, his lawyer, memory, or love interest, depending on what's real at the time.  She's initially too intense for a mild mannered person like Orr, but in the shifting sands of reality nothing is permanent.  While I'm incredibly sympathetic to Orr, I can also relate to Haber's and Lelache's more straightforwardly active points of view, as can all of these characters relate to each other to some extent.  I say "straightforwardly" active, because one could read Orr as representing the Daoist ideal of "action by non-action" (wu wei).

I also don't think this novel is anything like an explicit critique of political activism or utilitarianism (Le Guin's short story, "The Ones Who Walk Away from Omelas" is a more obvious critique of utilitarianism).  Perhaps Le Guin means to caution us from being too gauche and unsubtle in our social and political aspirations as well as our relationships with others and indeed in the way we relate to reality itself.

One of the things I love about Le Guin is that she doesn't like to write about tortured, pathological, or evil characters, as she says in the interview above and as Jo Walton points out in this excellent review (see also my review of Jo Walton's The Just City).  Sure, Le Guin's characters struggle, and they have drama, but in the end they are, like most of us real people, just trying to be decent, whatever they think that means.

Lastly, I suppose no book about dreams could escape the epistemological problem of how we tell a dream from reality in the first place, an issue discussed famously by Zhuangzi, Vasubandhu, and Descartes in the Chinese, Indian, and Western philosophical traditions respectively.  How does Orr tell the difference?  Does he?  Could the whole thing be a series of dreams within dreams?

Maybe we could take the route of ancient skeptics and say that the desire to know this is a form of unhealthy attachment (see my post on that dress that destroyed the internet in February 2015 for more on this move).  Maybe we could see this as a source of anxiety to be extinguished with better theories, as most contemporary philosophers do.  Or maybe we could take the route of the benevolent (and kind of hilarious) aliens who show up later in the book who are reported to believe that everything really is a dream in some sense: "Everything dreams.  The play of form, of being, is the dreaming of substance.  Rocks have their dreams, and the earth changes..." (p. 161).  That Le Guin hints at several answers without leaning too hard on any one of them shows that she just might be a Daoist Sage herself.