As fun as the Doof Warrior is, I want to make a serious point about humor. In the face of the terrible things going on in the world that can easily drive us to depression and despair, humor is one of the few things that can keep us sane.  It might also reveal something profound about the human condition.

None of this is to say I don't love a good non-subtle laugh, but it's the subtle stuff that sticks with me.  The Hitchhiker's Guide to the Galaxy, for instance, is filled with a lot of excellent non-subtle humor, like Vogon poetry.  But the subtle humor is what I love most, like the idea that the philosophers have a union that threatens a strike if the computer, Deep Thought, discovers the the answer to Life, the Universe, and Everything.  Here's the scene from the 1981 BBC version.

The master of subtle humor in science fiction is Iain M. Banks (I've praised him numerous times).  The names of the starships in the Culture series are amusing, such as Serious Callers Only, I Blame My Mother, The Anticipation of a New Lover's Arrival, and What is the Answer and Why?  Banks's non-Culture work, The Algebraist, includes a religion known as The Truth that says the universe is a simulation and the way to get it to stop is to convince most of its inhabitants that they are simulations (see a description here).

The aliens in Ursula Le Guin's The Lathe of Heaven are subtly hilarious.  They come to Earth, not to rule, but to open antique stores and give incomprehensible advice.

Samuel Delany's Triton comes to mind as well with the interactions between its wild characters, one of whom has a 9-to-5 job in metalogic.

Dr. Who also comes to mind, as does quite a bit of other British science fiction.  (LeGuin and Delany are the only Americans I've mentioned.  One wonders if we're just not very good with subtle humor.  Maybe we need to lighten up.  Perhaps the increasingly important role of comedians in American discourse is a step in the right direction.)

Subtle humor is also present in philosophy.  Zhuangzi wondering if he is a human dreaming of being a butterfly or vice versa and Nagel wondering what it's like to be a bat are both subtly humorous human-animal mashups. 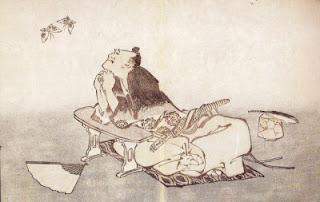 I smile a little bit every time classical Indian philosophers talk about Devadatta as a generic person, especially the Mīmāṃsā school's example of postulation (arthāpatti): "Fat Devadatta doesn't eat during the day, so he must eat at night."  Or think about Quine's thought experiment in his argument for the indeterminacy of translation: an anthropologist encountering a tribe with an untranslated language can't tell whether people using the word "gavagai" when rabbits hop by are referring to rabbits, undetached rabbit parts, or instantiations of rabbit-ness.

The straightforward value of subtle humor is that it makes things a little easier and more fun; it's the spoonful of sugar that makes the medicine go down.  The Doof Warrior illustrates this perfectly (at least for us, the audience).  We don't live in a world as bad as the world of Mad Max: Fury Road (at least if we're lucky enough not to live in extreme poverty in poor countries), but the Doof Warrior shows us that a little subtle humor can make a terrible world just a little easier to bear.

More deeply, I would argue that subtle humor also reveals something about the human condition.  We are thrust into a universe we don't understand with no explanation.  We just barely have the ability to comprehend mysteries that we seem unable to solve (such as: how could there be "old news"?). Our brief moments of conscious existence cease after an absurdly short period of time, time many of us spend reading inane listicles and waiting in line to buy overpriced coffee.  If you think about it, the human condition is pretty funny.  A little subtle humor helps us appreciate our limited time for what it is.  (I've written more about this last point in an essay for Louis C. K. and Philosophy, which will hopefully be out in early 2016).

Can you think of other examples of subtle humor?  Do you find it valuable?  Let's discuss!