"The most merciful thing in the world, I think, is the inability of the human mind to correlate all its contents... some day the piecing together of dissociated knowledge will open up such terrifying vistas of reality, and of our frightful position therein, that we shall either go mad from the revelation or flee from the light into the peace and safety of a new Dark Age.” - H. P. Lovecraft, "The Call of Cthulhu"


Halloween will soon be upon us, so a horrific post is the eldritch thing to do. And few people have shaped modern horror like H. P. Lovecraft, who has influenced big names like Stephen King, Clive Barker, H. R. Giger, Neil Gaiman, and Guillermo del Toro. He also inspired one of my favorite role-playing games.  I've been reading Lovecraft since my teens and I've long suspected that, while he's obviously a giant of the horror genre, he also wrote a weird kind of science fiction. I was pleased to hear a series of radio stories on Lovecraft this weekend on National Public Radio here in the US; I tuned in while an actor was reading from "The Call of Cthulhu" and immediately recognized Lovecraft's distinctive prose. In the first interview, author Erik Davis argued that Lovecraft's popular Cthulhu Mythos is really a kind of science fiction (see also his essay on Lovecraft).

Lovecraft is sometimes categorized as "supernatural horror." After all, his famed mythos is built around a pantheon that includes Cthulhu, Yog-Sothoth, Nyarlathotep, and others, many of whom attract cults of followers who practice magic.

My favorite definition of science fiction comes from Darko Suvin, who says that science fiction is the "literature of cognitive estrangement." That is, science fiction takes place in a world that is not ours, but one that exists more-or-less within or at the edges of the realm of the scientifically plausible. In other words: science fiction does not allow magic or the supernatural.

So how could the Cthulhu Mythos be science fiction?  First of all, Lovecraft's monsters and gods are creatures from outer space.  Nothing in Lovecraft's stories rules out the possibility that these creatures are as natural as we are.  They simply exist in a realm beyond our current understanding, one that our puny human minds can't comprehend without inviting madness.

But being beyond our understanding does not mean they are beyond understanding as such: Cthulhu himself may understand his ilk to be as natural as we understand ours. While the line between natural and supernatural is difficult to draw in any principled way, Lovecraft's explanation for the Mythos is not "It's magic!" but "It's understandable, just not by us."  So, the Cthulhu Mythos is really science fiction.  One anthology of Lovecraft-inspired science fiction makes this case even more explicit!  Drawing on a distinction I made in my review of The Martian, it's closer to mind-stretching Big Ideas SF like 2001: A Space Odyssey than it is to Engineers' SF like The Martian.

As another part of the radio program investigates, Lovecraft is also widely known for his racism and misogyny. It's impossible to deny that he had some repugnant views.  He freely used racial slurs, referred to people as "inhuman," "mongrels," and "savages."  Women, when they are portrayed at all, are as likely to be progenitors of horrific offspring as anything else.  I think his attitudes go far beyond "he was a man of his times." I have a lot of sympathy for people who don't want to read Lovecraft for this reason. I also don't think we can "separate the art from the artist," since his attitudes inhabit his stories. There has been controversy about whether the World Fantasy Award should remain a statue of Lovecraft. I suspect that it's possible to acknowledge Lovecraft's nauseating views while also appreciating the genius within his work. See this excellent piece by Laura Miller for a similar take.


The history of philosophy offers parallel cases. Aristotle, for instance, had notoriously terrible views about slaves and women, but he also said some cool things about virtue and the value of understanding. It's possible, I think, to use Aristotle's own philosophy against him to argue that every human being is capable of human flourishing. A recent anthology of Lovecraft-inpired stories by women attempts something similar with Lovecaft (She Walks in Shadows, edited by Silvia Moreno-Garcia).

Along with his many flaws, Lovecraft is a deeply philosophical writer.  As Erik Davis notes in this week's radio interview, Lovecraft's work can be seen as a response to 20th century scientific materialism, which Lovecraft took to indicate a vast, meaningless universe as opposed to traditional religious or mythological world views.  As Davis notes, Lovecraft's monsters and gods are not "supernatural," but instead represent "the aesthetics of the absurd" in the sense of Dadaism or Albert Camus.  That is, the tragicomic mismatch between humans' sense of meaning and a meaningless cosmos creates a sense of absurdity.  This can be horrific, but I think it's kind of funny, too (see my post on subtle humor).

Lovecraft dramatizes this sense of absurdity through human contact with vast alien intelligences beyond our human ken.  Although Cthulhu is often popularly called "evil" (see my favorite example below), Lovecraft's creatures are so much more terrifying precisely because they exist far beyond our human concepts of good and evil, screaming out of the blackness of a boundless, amoral cosmos. 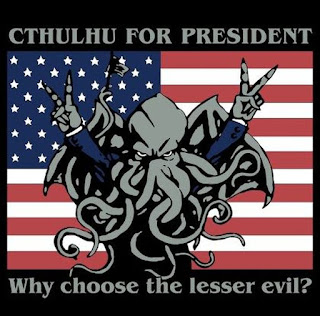 Lovecraft also initiates some interesting thoughts in the theory of knowledge (epistemology).  In the radio program mentioned, philosopher Eugene Thacker mentions the story "From Beyond" as an example of Lovecraft's exploration of knowledge of dimensions beyond our previous understanding, perhaps a nod to quantum physics.

I began this post with my favorite quote from "The Call of Cthulhu," which invites the question: is knowledge always desirable?  Ancient skeptics like Sextus Empiricus, Zhuangzi, Nāgārjuna, and Jayarāśi begin with the attitude that the pursuit of knowledge is not always a healthy thing.  They offer therapy for those of us whose minds are disturbed by the wages of knowledge - the pursuit of it, the defense of your claims, the attachment to your own views, the lack of freedom to explore other views, etc.  Just as Lovecraft dramatizes the idea of the absurd, so does he dramatize the rationale for ancient skepticism.

A final thought: Would it be more horrifying if the Mythos creatures weren't there? Terrifying as they are, at least Cthulhu and Nyarlathotep would mean that we're not alone and that the universe might exist on levels beyond us and our ability to understand.  Is this a weird kind of hope?  Is the human condition more absurd or less absurd if the universe were to contain unfathomable creatures beyond our feeble spheres of thought?

The true eldritch horror may not be incomprehensible beings descending from the stars, but the human condition itself.