I thought I’d finally get around to writing about my further thoughts on Star Wars Episode VII: The Force Awakens. You can see my initial non-spoilery reactions here.

I’ve now seen it seven times, which is coincidentally the number of times I saw Episode I in the theaters. While I deeply regret seeing Episode I that many times, Episode VII has gotten better each time. And it has stuck with me. I’m pretty sure I’ll still like it in several years, whereas I soured on Episode I within a few weeks.  Why it took me that long I'm not sure.  Maybe it took awhile for George Lucas's Prequel Death Star to obliterate my childhood.  But, as Maz Kanata might say, that's a story for another time.

This post is in full spoiler mode.  There will be lots and lots of spoilers. If you haven’t seen The Force Awakens yet, two things: 1. What have you been doing?, 2. Don’t keep reading unless you don’t mind major spoilers.  Seriously.  You have been warned.


It’s Not a Remake or a Reboot

One of the most annoying and short-sighted criticisms of The Force Awakens is that it's merely a remake or reboot of the first Star Wars film, A New Hope.  I understand why someone might feel like this is another installment of "desert-dwelling teenager becomes part of destroying a planet-killing weapon."  If you think that, I implore you to read Chris Taylor's "5 Questions for Anyone Who Calls Star Wars: The Force Awakens a 'Remake.'"  While you're at it, see what director J. J. Abrams had to say about it.

I don't want to do too much rebooting of Taylor's excellent points, but the point about whether people have recently seen A New Hope is most salient for me.  Maybe it's because I re-watched Episodes IV-VI in the days before I went to see The Force Awakens, but it was pretty obvious to me that The Force Awakens was borrowing some tropes from the original trilogy, but was doing some new things with them, which is precisely why it, unlike Lucas's Prequels, felt like a real Star Wars movie.  (See this somewhat pretentious, but interesting, take on Star Wars that suggests that Lucas used the prequels to turn Star Wars into Star Trek while Abrams returned things to native Star Wars territory).

The real short-sightedness of the "it's just a reboot" rebuke is that Star Wars movies have always been derivative.  Lucas combined heavy doses of Kurosawa samurai movies, Westerns, Flash Gordon, and Joseph Campbell's hero cycle to make a Star Wars stew.  The only difference now is that Star Wars itself has become part of the mix, a sort of postmodern meta-intertextuality if you will (or maybe you won't -- that's a mouthful!).  If Abrams and company hadn't drawn on the old Star Wars movies, people would whine that The Force Awakens felt like the prequels or worse (if it could get any worse).  You can't have something that feels like Star Wars without some of those elements.

We can debate which elements were required to make this feel like Star Wars.  The Starkiller Base is maybe a bit much, but it is a hyper-light speed weapon capable of destroying whole systems.  Besides, certainly no military in the universe would ever go to excess trying similar weapons and tactics over and over again expecting different results?  Nobody would ever try to wage a war in Russia in the winter, build bigger and bigger nuclear weapons that could destroy all life on Earth several times over, spend billions of dollars on fighter jets that nobody needs, or use drones that kill civilians as well as terrorists. I'm sure militaries in a galaxy far, far away would never be prone to such destructive excess.  So if you think about it, the Starkiller Base is a critique of the militaristic impulse itself, which should also be obvious from General Hux's creepy little Nazi rally (speaking of General Hux, see his hilarious emails to the Starkiller Base contractors).  The Starkiller Base seems like the stupidest part of the movie, but it just might be one of its deepest social critiques.

As I discussed before and as many others, like Takeia Marie, have noted, one of the great things about The Force Awakens is its diversity, which reminds us of other diverse places such as Earth.  In addition to his role in bringing diversity to the screen, Finn, played by John Boyega, is one of the most interesting characters in any Star Wars movie.

The First Order is apparently kidnapping children instead of using clones as stormtroopers.  It took me a few viewings to notice, but there's scene where you can see a picture of cute little Finn on a computer screen, which reminds us that he did have a life before the First Order.  What's unique about all this is that we get a humanized stormtrooper.  Sure, we met Jango Fett in Episode II as the person cloned to make all the original stormtroopers, but that's a very different story.  He didn't start out as a stormtrooper; in some sense they started out as him. 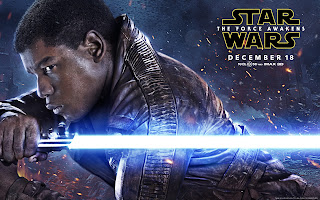 Finn's story raises a lot of philosophical issues.  How could someone conditioned from a young age to be a stormtrooper suddenly defy that conditioning, and apparently with little serious psychological trauma?  Did he make a completely free choice unconditioned by his past, stepping outside of the bounds of cause and effect?  Or was there some other cause for his choice from his pre-First Order days, his genetics, something he ate, etc.?  In other words, Finn's story is a great way of tackling the major philosophical issue of freedom and determinism.  (I've also dealt with this issue in Philip K. Dick movies and novels in my contribution to Philip K. Dick and Philosophy).

Does Finn have a mysterious thing called "free will," which is a force - but maybe not the Force - that in some sense defies scientific explanation?  Or, as compatibilists would say, does Finn have all the freedom anyone in any galaxy would want without any spooky uncaused causes required?

Whatever the answers to these questions might be, I'll be eager to see what becomes of Finn, assuming he wakes up.  In the meantime, someone should write fan fiction called, "Do Former Stormtroopers Dream of Electric Banthas?"

(For more on similar and dissimilar philosophical issues, see "Philosophers on Star Wars: The Force Awakens" at The Daily Nous).

There are a lot of great characters in The Force Awakens, but it's obvious who the main character is.  And what an interesting character she is!  The more I’ve seen it, the more I’ve gotten goosebumps during the part where Rey uses the Force to whisk Luke’s lightsaber past Kylo Ren.  I love that everyone keeps asking Rey if she's okay and, because she's perfectly capable of taking care of herself, her response is always Daisy Ridley's bewildered smirk and "Yeah."  It's as if she's responding directly to misogyny. 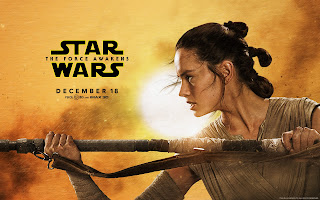 There's a lot of speculation about Rey's background.  Is she Luke's daughter as most clues seem to indicate?  Han and/or Leia's daughter?  Obi-Wan's granddaughter?  The daughter of characters we haven't met?  A clone?  I'm not sure what to think.  I'd be okay with any of those outcomes.  I think we can all agree that the one thing we definitely don't need is another Force-induced virgin birth, and with Lucas out of the picture, I'm hopeful we can avoid it.

But the really interesting thing isn't Rey's past, but, as Maz Kanata tells her, her future.  Can I just pause for a second and say how much I love Maz, too?  A bartender wise in the ways of the Force?  What's not to love?

Anyway, what will become of Rey?  Will she harness her obviously strong Force sensitivity to become a great Jedi like her father(?) before her?  Will she hang out for awhile on that island with Luke (maybe as a sort of bring your daughter to work day)?  Will she go into politics and military service like her mother/aunt/random person, Leia?  Will she be tempted by the Dark Side like (her grandfather?) Anakin?  Will she defeat (her cousin/brother?) Kylo Ren or join him?  Will she do something I haven't even thought of?

I'm sure whatever she does, it will be riveting stuff for Star Wars fans.

The Dao of the Force

Star Wars has had Daoist and Buddhist elements from the beginning.  See "Yin, Yang, and the Force" by Joshua Whitson for a treatment of the Daoist themes and this post from Matthew Sullivan on Zen Buddhist elements.

I was glad to see a bit of these elements in The Force Awakens as well.  Maz's description of the Force and how you know it when your mind is passive and accepting sounds like the kinds of descriptions of the Dao you get in Laozi and Zhuangzi.  She sounds like a Daoist sage as much as if not more so than Yoda or Obi-Wan.  Admittedly this picture of the relation between the Dao and the Force works better if you take a more mystical interpretation of Daoism in which the Dao is known via direct, ineffable experience as an origin/imminent underlying reality of all things.  Still, consider the concept of non action (wu wei), which isn't actually not doing anything at all, but rather doing things in the most skillful way without overthinking.  It's like an athlete being in the zone versus a physiological description of athletic feats.  Ever since Luke destroyed Death Star I after turning off his targeting computer, people in Star Wars movies have been cultivating the ways of wu wei.  And Rey's battle with Kylo Ren in the snowy forest is another great moment where skillful action in tune with the Dao/Force triumphs.

There are also strong Stoic and Buddhist elements when it comes to responding to strong emotions.  In the moment where Rey is quite literally about to plunge over a cliff of defeat, she remembers Maz's lessons and stills her mind and doesn't let anger or fear take over.  Once she does this, she's able to defend herself skillfully and with Chewie's help (poor Chewie!), she rescues Finn.  Could she do all that if her mind were clouded by anger and fear?  Can we cultivate our minds to respond in healthy ways to our emotions as Buddhists, Stoics, and Jedi claim we can?

I'm not claiming that The Force Awakens is a Daoist, Buddhist, or Stoic movie.  Honestly such a movie might not be that exciting, with the possible exception of a comedic biopic of Zhuangzi, which would be hilarious.  But it's fun to see how these philosophies might enhance our enjoyment of the movie and what we can learn from it.

Of course there's a lot more to say about The Force Awakens than I've said here.  What's the deal with Kylo Ren?  Is he a more interesting character than Darth Vader?  Why is he so emo?  How did Maz get that lightsaber?  What is Chewie going to do with his post-Han life?  How do wookies grieve?  Why did Leia never become a Jedi?  What's the political situation between the Republic, the First Order, and the Resistance?  What's Poe's back story?  How did Lor San Tekka get that map, and who is he, anyway?  Why did R2D2 wake up?  How did C3PO get that red arm?  Is BB-8 the most adorable droid of all time, and is R2D2 jealous?  Will Admiral Ackbar suspect that Finn is a double agent and declare, "It's a trap!"?  Will we get answers to any of these questions in Episodes VIII and IX?

Perhaps the greatest thing about The Force Awakens is that it, like philosophy, leaves us with more questions than answers.
Posted by Ethan at 11:15:00 AM