Academic Review of Reviews: Books by Beckwith, Carpenter, and Siderits/Katsura 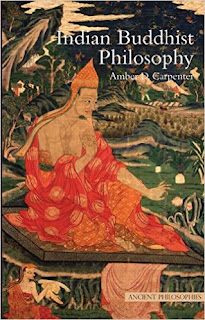 One of the professional academic hats I wear is that of the Book Review Editor at the Indian Philosophy Blog.  I'm always in search of reviewers for that blog.  To encourage others to submit their own reviews I wrote some short book notes of my own on Christopher Beckwith's Greek Buddha (which I also discussed here), Amber Carpenter's Indian Buddhist Philosophy, and the translation of Nāgārjuna's Mūlamadhyamakakārikā by Mark Siderits and Shōryu Katsura.

You can see the full post here: "Brief Book Notes on Beckwith, Carpenter, and Siderits/Katura, by Ethan Mills."

Here are some excerpts: 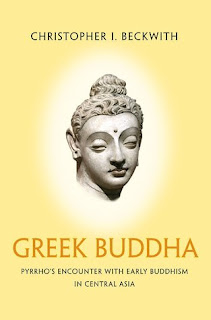 ... Beckwith is not the first scholar to argue that Pyrrho and early Indian Buddhism are historically related in some way ... As with previous studies, the evidence available is not quite up to the task to which Beckwith puts it. Uniquely, however, Beckwith takes a more “scientific” approach that relies on “hard evidence” from archaeology, history, and linguistics.

This approach makes Beckwith’s study more provocative, especially the ways in which it challenges orthodox interpretations of early Buddhism (he sees it as a reaction to Zoroastrianism, not Brahmanism) and in his more philosophical claims (Beckwith claims that the Buddha, Pyrrho, and Hume all argue against a form of absolutism).  ...

A larger problem is that the book is a bit dogmatic – perhaps an ironic aspect of a book about skepticism! ...

This book is difficult to categorize. It’s not exactly an introduction, but neither does it dwell on specialist minutiae. It’s not a straightforward historical overview, but neither is it arranged purely thematically. Instead of fitting into the typical categories, Carpenter does something more interesting: she presents a great example of what I would call expanding the history of philosophy.   ...

A lot of her discussions, like her treatment of suffering in chapter one, are insightful for beginners and specialists alike. While this may not be an ideal book for readers entirely unfamiliar with Buddhist philosophy, it would be ideal for readers with a little background in both Western and Indian philosophy hoping to delve more deeply. And people such as myself who are seeking to expand the history of philosophy, especially in a Hellenistic-Indian mode, will find a lot of inspiration here. Translating Nāgārjuna’s Mūlamadhyamakakārikā (MMK) is no easy task; the Sanskrit text is often obscure and has long history of varied interpretation, commentary, and translation in Asian and European languages. One might wonder whether we need yet another English translation, or more cynically, whether another translation will merely mirror the translator’s interpretation.

For the most part, this translation from Siderits and Katsura, both eminent scholars of Buddhist philosophy, offers both a novel, insightful translation and allows readers to come to their own conclusions.  ...

I think this is now the best English translation available. I recently used it in a comparative philosophy course. While Nāgārjuna is never easy, this translation presented the text to newcomers in a way that allowed them to get something out of it. It also helps me make more sense of a text with which I’ve been grappling for years.


You can read the original post over at the Indian Philosophy Blog.
Posted by Ethan at 6:53:00 AM