Worldcon Report 2: Fun Times, Hugo Results, and the Incoherence of the Puppies 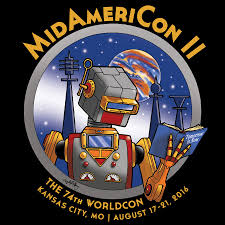 The 74h Worldcon (MidAmeriCon II) has ended.  After a brief impromptu bonus vacation in Charlotte, North Carolina (due to missing a connecting flight), I'm back home in Chattanooga.  So here's Worldcon Report 2! (See Worldcon Report 1, which includes my first George R. R. Martin sighting of the con).

Here are some of the highlights from Saturday and Sunday.


My Hugo Ballot Versus Reality

My own Hugo ballot was pretty close to the official results.  My picks mirrored the winners for Novel, Novella, Novelette, Short Story, Graphic Story, Professional Editor - Long Form, Fanzine, Fan Writer, and Fan Artist.  Although I didn't vote for Andy Weir for the Campbell Award, I was so sure he'd win that I voted for Alyssa Wong, so technically I should count that one, too.  Not bad for my first try!

You can read about my voting process here and here.  The one big surprise for me was The Martian winning for Dramatic Presentation - Long Form.  Since it was up against Star Wars: The Force Awakens and my personal favorite, Mad Max: Fury Road, not to mention other good ones like Ex Machina, there was some stiff competition.

I guess the fans went with the humorous Engineers' SF this year (see my review of The Martian for what I mean by that).  I don't mind that The Martian won.  It's a good movie.  I personally didn't think it was the best (my preferences unsurprisingly run toward Big Ideas SF rather than Engineers' SF), but the award was accepted by real astronaut wearing a tiara, so that made it all worthwhile.

On the Incoherence of the Puppies

The Hugo Awards Ceremony was in itself quite an affair -- it's Oscar night for SF/F nerds!  But it was also an important event in the ongoing saga of fandom and the Puppies Sad and Rabid.  As you may have heard elsewhere (here, here, and here), it was a bad night for the Rabid Puppies and a good night for fandom.  The acceptance speeches from Jemisin, Okorafor, and Gaiman were inspiring rebukes of the Puppies and their efforts.

The moral failings of the Puppies, especially of the Rabid variety, are well known.  I don't need to go into them here.  Last year I noted the irony that in their attempts to overcome an imaginary conspiracy of SJWs, the Puppies engaged in real conspiracies of their own.  I also suspect that many in fandom, including me, simply enjoyed the non-Puppy favored works for purely aesthetic reasons.  Nonetheless, the lines between aesthetics, politics, and morality are blurred when some Puppies seem to assume that no works by women or people of color or those that tackle themes of social justice could be good.  Maybe you personally didn't like N. K. Jemisin's Hugo-winning The Fifth Season (I loved it!), but there's no denying its novelty and artistic merits.

One issue that occurred to me at Worldcon was that the Puppies aren't just at fault morally and aesthetically, they're logically incoherent.  Allow me to explain.

Most people who go to science fiction, fantasy, and horror conventions do so because such spaces are accepting of differences: differences from the world of "normals" who for reasons I can't comprehend don't want to obsess over Star Trek or Star Wars, differences from a world that tells you that adults can't love this stuff with pure, childhood glee.  Above all this community consists of members who are different among themselves but who recognize that these differences enhance the community: we don't all have to be the same to love these genres.  We can all let our nerd flags fly proudly and freely, but these flags need not be identical.  The whole idea of fandom is the acceptance of people who are different, people who are ridiculed elsewhere for being who they are and loving what they love.  This was a big theme of the Alienation in SF panel mentioned above.

Of course, we need to recognize that fandom doesn't always live up to these ideals of acceptance.  Some differences have been more equally accepted than others, especially when it comes to gender, race, sexuality, ability, and so on.  But I think fandom is for the most part imperfectly working toward a more perfect unity in diversity.

The fundamental incoherence of the whole idea of the Puppies, and here I include the Sad and Rabid alike, is this: by declaring what kinds of topics or sub-genres fans should like and by claiming that it's unthinkable that fans might simply enjoy more diverse perspectives and literary innovation, they are contradicting the openness and acceptance of difference that forms the existential Constitution of fandom's very being.

Maybe the Puppies have forgotten that the whole reason we have fandom is to celebrate our differences from the normals as well as the differences among ourselves.  Maybe they never understood what fandom is all about.

Whatever the case, the Hugo voting last year and this year as well as the openness of most fans I've encountered at Worldcon and other cons make me confident of one thing: although their yapping will most certainly continue, the Puppies do not represent fandom.  No one contingent of fandom does.  That's what makes it beautiful.
Posted by Ethan at 8:34:00 PM

Email ThisBlogThis!Share to TwitterShare to FacebookShare to Pinterest
Labels: 42, Diversity, Everything, Fandom, Life, The universe, Value