Twin Peaks and the Pleasures of Weirdness


When I was in junior high in the early 1990's, my friend Adam kept telling me about this weird show called Twin Peaks.  It didn't sound like the sort of show typical 14-year-olds would be into.  I couldn't really tell what it was about, honestly, beyond some sort of murder mystery and an FBI agent who really liked pie.  I probably watched a couple episodes, said, "Cool," and moved on.

Several years later when we were (technically) adults, Adam had a weekend Twin Peaks marathon on VHS (this was way before Netflix made marathon viewing a normal thing).  I've been a big fan ever since.  I've watched the original series a few times, most recently to prepare for the new season/return on Showtime.  Incidentally, Adam and I are still good friends, and it may be no coincidence that he became a horror and fantasy author -- check out his stuff as well as what he has to say about Twin Peaks.

The original Twin Peaks was many things: a murder mystery, an evening soap opera, an investigation into the seedier side of small town America.  But as compelling as all that was, for me the greatest achievement of Twin Peaks was its unrepentant weirdness that constantly leaves me wondering, "How in the hell did this get on TV?" (Okay, the commercial success of movies like David Lynch's Blue Velvet (1986) probably had something to do with it, but that really only deepens the mystery if you actually watch his movies.)


I love weird stuff.  I love it because it's weird.  And Twin Peaks is weird.  The original show draws in the viewer with a promise of a detective show/evening soap opera about a teenage girl's murder in a quirky town, but then it quickly becomes ... well, what, exactly?  Something about a mystical FBI agent who solves crimes by throwing rocks, a malevolent spirit (or something else?) called "Bob," a lady who talks to a log, a grumpy FBI agent who follows the nonviolent principles of Gandhi and King, an Air Force officer (coincidentally played by the guy who played Scully's dad on The X-Files) who is involved with aliens, and the weirdest of them all: a place called the Black Lodge, a place I won't even try to explain.

The return on Showtime (or season three, depending on how you slice that damn fine pie) doesn't bother sweetening the deal to attract viewers.  If you're not here for unfiltered weird, turn off your TV, because Lynch is not watering anything down.  Casual viewers be damned.  Twin Peaks is as weird as ever.  Scratch that, it's even weirder.  Lynch has gone full Blue Velvet, Lost Highway, or Mulholland Drive on this one (even a pinch of Eraserhead).

The Black Lodge is back and... more, I guess?  There's a guy called "Mr. Jackpots," who can make slot machines pay out.  There's a grown man who goes by "Dougie" (the weirdest thing about Dougie is imagining what he was like before the events of the show that makes people treat "Dougie" as they do).  A mysterious murder takes place in North Dakota with a head next to a body not originally owned by the same person (the gross out factor is way beyond network TV now).  A guy in New York City watches a clear box for a living.  And there's stuff I couldn't describe even if I wanted to give spoilers.

You might notice I said nothing about the town of Twin Peaks itself.  Not as much of the show takes place there as you might expect.  Still, a lot of old favorites are back, but I don't really want to spoil that with a who's who aside from saying that there are performances from a few deceased members of the cast (not with Rogue One-style CGI, but because they filmed their scenes before they died).  Some of the quirky humor is still there, but mostly the Twin Peaks scenes have the uncanny feeling you get seeing people you haven't seen for 25 years, only a dash more uncanny because, well, it's Twin Peaks.

And I have to specifically mention Episode 8 of the new show/season.  That is probably the single weirdest hour of television I've ever seen.

The Pleasures of Weirdness


But why can weirdness be so much fun?  My theory is that weirdness is so pleasurable precisely because making sense of the world -- something we do constantly -- is a lot of work.  Watching a scene in the Black Lodge is a way to relax your sense-making mechanism, to open up your mind to things without trying to squeeze them into pre-made conceptual categories.  To just experience.

Of course, making sense of the world is a good thing.  Usually.  You'd probably be dead by now if you didn't make some sense of things.  It allows us to predict and influence our surroundings.

But making sense of things gets exhausting.  It can also, as Buddhists and Daoists might say, lead to suffering, especially when the categories in your mind don't match what's going on in the world.  How many of the world's problems, how much anxiety and general crappiness result from people misapprehending the world around them because they can't be open to change or wider perspectives?

The sense-making drive is essential, but it can be harmful if pushed too far.  This is, as I see it, the greatest lesson of ancient skeptical philosophers like Sextus Empiricus, Nāgārjuna, and Jayarāśi.  For them, many philosophers represent sense-making run amok, so they develop a sort of therapy that short-circuits the harmful tendencies by using them against themselves.  This is meant to cure us of this ill, which in various ways leads to what I've called mental coolness, a state of mind beyond anxiety and unhealthy fixations.

Weird stuff like Twin Peaks does much the same thing for me: it turns the sense-making drive against itself, leaving us with a particular sort of aesthetic bliss (not that Twin Peaks can't also be disturbing, but in those cases it's still pleasurable in the same way that horror movies are).  Like anyone else, I go through my life constantly trying to make sense of things: the 2016 US election, why we can't all just get along, why weed wackers have to be so loud, how people can like kale so much, etc.

But Twin Peaks and other weird stuff reminds us that the universe is bigger, older, and far weirder than us.  Some part of it will probably always elude the grasp of our sense-making abilities.  And that's okay.  It's even something to celebrate.  Imagine how boring life would be if you had already made sense of everything!

Weirdness brings a double pleasure: it allows your sense-making mind to relax while at the same time opening your mind to novel experiences.


The Comedy of Explanation

But for my part, the fact that Twin Peaks can't be explained is the whole point.

I think it's kind of funny when people try to explain weirdness or other forms of deliberate ambiguity (like the ending of Inception).  It reminds me, perhaps, of the comedy of a species of primates on the third planet of an unremarkable star having the hubris to think they know much of anything about the universe.  I'm not saying we shouldn't try to know some stuff.  By all means we should.  Knowledge is cool.  But maybe we need a little weirdness like Twin Peaks to remind us of our limitations -- and how lucky we are to have them. 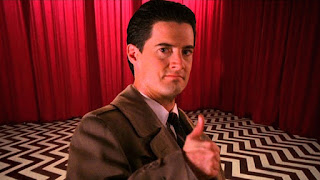