Daoism for Wizards: A Wizard of Earthsea by Ursula K. Le Guin 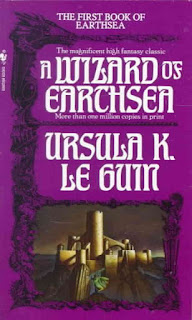 Brilliant.  Amazing.  The kind of book that changes you for having read it.  In other words: typical Ursula K. Le Guin.  I probably need a few more readings to probe the Daoist depths of this work.  This review simply can't do it justice, but then again one of the strengths of this book is that it presents merely hints of an inexhaustible universe.  There is much more than meets the eye, or even could meet any eye.

Upon the death of the author (or a specific author: Ursula K. Le Guin), I took some time to reflect on everything I've learned from Le Guin (see my post "Five Lessons from Le Guin").  I also reminded myself that, while I had read most of her well known science fiction work, I had yet to read what is probably her most popular work: the fantasy novel A Wizard of Earthsea and its many sequels.  Part of this is that I'm generally more of a science fiction than fantasy fan.  But it seemed an inexcusable oversight when it came to someone I always say is one of my favorite authors.  It would be like claiming to be an Isaac Asimov fan without having read the Foundation trilogy or an Octavia Butler fan without having read the Earthseed duology.

So I dug out the old copy I picked up at a library sale many years ago and gave it a shot (see picture above; I believe this copy has made at least two interstate moves with me and has been lurking on my bookshelf for years).

Like most of Le Guin's work, you have to allow her to work her magic.  It takes time.  You may not find yourself turning the pages quickly.  As Le Guin herself might ask, why should "page-turner" be a good thing for a book to be, anyway?  Is it not more meaningful to savor a book, to let it seep into your being?

That's just what A Wizard of Earthsea does.

Instead of imagining what Le Guin might have said, I should let her speak for herself:

"All power is one in source and end, I think.  Years and distances, stars and candles, water and wind and wizardry, the craft in a man's hand and the wisdom in a tree's root: they all arise together.  My name, and yours, and the true name of the sun, or a spring of water, or an unborn child, all are syllables of the great word that is very slowly spoken by the shining of the stars.  There is no other power.  No other name." (A Wizard of Earthsea, p. 164)


The novel isn't of course merely Daoist philosophy (although there is plenty of that!).  We meet a boy named Ged, who as many young boy protagonists in fantasy novels are, is special.  He is, it seems, destined to become a great wizard.  He travels to a wizard school (Hogwarts avant la lettre). Ged is, again like many fantasy protagonists, a bit full of himself.  A spell miscast releases a shadow (of himself?) that becomes his main antagonist.  Sure, we meet the occasional dragon (as does Ged), but are we ultimately all our own worst antagonists?  Along the way Ged becomes less full of himself and more full of all things.

The magic system relies on finding the true names of things, perhaps reminiscent of the first line of Laozi's Dao De Jing. This line is variously translated, but Laozi may be suggesting that true names cannot be spoken.  Is this true in the novel?  Or can true names only be spoken by wizards?  Does the very speaking remove us from the names of all things?  Are there other, more direct ways of realizing our connections with the way and its power?

A Wizard of Earthsea can work as a straightforward fantasy, maybe even a YA fantasy.  But it's not merely entertainment.  It teaches you something about the universe and most deeply about yourself.

One of the lessons of the novel seems to be in line with the Daoist idea of wu wei (literally "non-action," but really more acting as skillfully and minimally as possible).  Thus, it seems appropriate to end my review here, to review more by writing less: my words can merely gesture toward the novel's fathomless depths, which I encourage you to experience for yourself.
Posted by Ethan at 7:03:00 PM