Philoso-monks Save Some Worlds: Anathem by Neal Stephenson 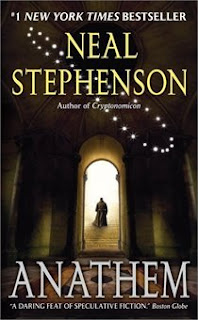 I finally found the Neal Stephenson book that's right for me. I've enjoyed a few of Stephenson's other books (particularly Snow Crash and Seveneves), but I admit I wasn't sure what all the hype surrounding Stephenson was about. Now that I found the right book, I get it.

It took me awhile to read this book, but not because I didn't enjoy it. Part of what took so long was my desire to savor it, part of it was because I had to put it on hold to finish my reading for Hugo voting, but mostly it took while because - immersive as it is - this is just one long ass book.

A few times while reading this book, I tried to explain the basic premise to friends. The best I could do is something like this: weird monks on an alien planet or maybe another dimension talk about philosophy, science, and math. This does not in any way do it justice, of course, but it's really hard to explain this novel.

Of course, for hard core Stephenson fans, the name on the cover is enough. And for philosophers such as myself, those weird alien philosophical monks are irresistible (which is why this novel made a lot of the lists of philosophers' picks for best philosophical SF compiled by Eric Schwitzgebel). I wouldn't be surprised if there are some other lovers of this book who sometimes dream about a life as a monastic entirely dedicated to intellectual pursuits, or who maybe just liked Umberto Eco's The Name of the Rose. Others who might love this: people who love immersive world building and massive tomes that come with with a glossary (no maps here, but there are a few calcas - explanatory appendices for those who need even more nerdish detail).  As I am at least an occasional member of all of the above groups, my love for this book is present in all nearby possible worlds.

The plot is no easier to describe than the basic premise, but our main character and narrator, Erasmus (one of those alien monks) ends up on a bizarre quest that takes him out of the monastery for something bigger than he could imagine. Let's leave it there for now.

In my reviews I usually like to draw out the philosophical content of science fiction that may not be obvious, but on that front Stephenson hasn't left me much to do. It's all there if you know what you're looking for. This isn't to say that Stephenson doesn't do some of his own innovation. One of my favorite little touches is the Lorite school that believes everything has been thought of already, which is their motivation to do careful history of philosophy! I don't want to give any major spoilers (because in this novel mentioning the philosophy is a spoiler), but I will mention that something like the confluence of Platonism (aka, "the Hylaean Theoric World") and the many worlds interpretation of quantum mechanics is integral to the plot in the last half of the book. It's pretty cool (and much like quantum mechanics here on Earth, I'm not entirely sure I understood it all).

As cool as the last third of the book is, I think my favorite parts are the world building at the beginning and in the middle. The monasteries are inspired by the Millennium Clock (Stephenson says so in the acknowledgements), which tries to get us thinking in the long term. What if there were monastics who only visited the outside world once every year, every decade, every hundred years, or even every thousand years, but otherwise dedicated their lives to intellectual pursuits separate from the outside (or "Saecular" or "Extramuros") world? What if most of these monastics didn't believe in a creator God? Would they still be religious in some sense in their codes of behavior, communal living, and elaborate rituals? (I tend to say yes, but I think most Westerners have a notion of religion far too dependent on Abrahamic theism). What happens when some of these monastics go into the outside world (besides classic fish-out-of-water hijinks, of course)? What do the people outside think of them and vice versa? Are the monastic types (aka, "Avout") snobby elitists who are a little too full of themselves, or are they appropriately proud of their devotion to a life of the mind? How should those of us here in our reality who pursue "useless" intellectual endeavors think of our relationship to our more "practically minded" fellow humans? What if a world much like ours had a somewhat different history? What kinds of histories could we imagine? And what do we learn from doing so?

One of Stephenson's greatest achievements is that it's not just the explicitly philosophical references that give rich food for thought: it's the whole thing from the characters and plot to the world building and the imagined history. The book is over 900 pages, but easily contains 2,000 pages worth of stuff to think about.

As enthusiastic as I am about this book, it's not a perfect specimen of the Hylaean Theoric World. The philosophical references are all Western-inspired and, with a few exceptions, seem to be the only foundations for the philosophies of the monastics around this world. I think Stephenson missed a big opportunity to have some maybe Daoist, Buddhist, Yoruba, Ethiopian, etc. inspired philosophies (the Vaisesikas in classical India had some cool ideas in philosophy of mathematics that might have been fun to include; Stephenson calls a monastic community a "math," which whether he knows it or not, is a Sanskrit-derived Hindi word for cloister or monastery). There are plenty of women monastics ("Suurs") in addition to the men ("Fraas"), but we don't get to know too many of the women (maybe because the narrator is a young man?). As enjoyable as the dialogues and somewhat meandering plot were, sometimes it was easy to get swept along and forget who was doing what and why. Maybe this was my own problem, but it seemed like Stephenson did a lot of the explanation long after the action, which in a book this long can be hard to keep track of.  I wanted a separate glossary for the second half of the book that could both avoid spoilers for the first half and remind me what was going on.

But these issues shouldn't detract too much from Stephenson's immense accomplishment. I plan to read Anathem again someday, either in this or some other universe.