Space Chillwave, Not Space Opera: Record of a Spaceborn Few by Becky Chambers 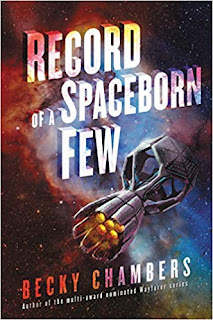 I went into Record of a Spaceborn Few by Becky Chambers with mixed feelings.  It's the third in a series, but I haven't read the first book and I gave up on the second one after 50 pages (it seemed okay, but nothing special).  But, wanting to do my duty as a Hugo voter, feeling bad about never finishing the second one (itself a Hugo finalist two years ago), and vaguely feeling like this might be my kind of thing after all, I decided to give this a go.

My mixed feelings continued for at least the first third of the novel.  Part of my mixed feelings were about whether this was a "novel" at all, or merely unconnected novellas cut up and shuffled together. I kept forgetting who was who among the five or six main characters.  Worse yet, one of them seemed to be a predictably angsty teenager intent on demonstrating that teen angst is as timeless and universal a phenomenon as it is an obnoxious one.

By the middle of the novel, though, Chambers had won me over.  I understood what people love about these books.

I even came to begrudgingly like the angsty teenager.  I came to love the funeral director (of sorts - it's more complicated than that) and the alien anthropologist.  I even came to see how all the story lines fit together in something like a French apartment novel (as Kim Stanley Robinson discussed in reference to his novel New York 2140).  It even turns out that this novel merely takes place in the same universe as the previous novels, so not having read them was no impairment at all to picking up the third one, although I surely missed some subtle connections fans of the first two novels would notice.

The setting was really interesting and philosophically fruitful: a fleet of generation ships dating back to a time before contact with aliens who possess advanced technology that made generation ships useless.  Instead of traversing the inky depths of interstellar space, the Fleet orbits a planet.  Still, the people continue to live there.  Why? It's complicated.  But it prompts the existential question: What are we, the readers, doing on a rock hurtling through space heading nowhere in particular, destined to die?  It starts off subtle but it all gets pretty deep (we're talking meaning-of-life type stuff, some of it - damn it - coming from the angsty teen).  This really surprised me considering a lot of the novel feels pretty... light and fluffy.  You could totally read this as a light and fluffy space romp and enjoy it just fine, but there are depths if you're willing to look into the subtleties.

Some reviewers have complained that "nothing happens."  It's true that nobody is saving the galaxy here.  But galaxy-saving is a bit overdone, isn't it?  This isn't Space Opera as much as Space Chillwave.  Think Star Trek or Iain M. Banks's The Culture, but without any of the Klingons, Borg, Idirans, or other external baddies.

Chambers's galaxy doesn't particularly need saving.  Maybe a quick tune-up is all.  It's a pretty nice place.  In fact, the "niceness" of Chambers's universe is something I came to love.  Nobody in the Fleet is starving or homeless, and no one is putting immigrant children in cages, threatening war, eliminating reproductive rights, or ignoring an impending ecological catastrophe.  They're all just living their lives the best they can.

It would be tempting to think Chambers is merely engaging in escapism for naïve leftists (to be fair, there's a bit of that), but I think her deeper point may be this: In a just universe living a human life would be enough drama for anyone.  Utopia (or something like it) will not eliminate all our problems, but it would make them easier to bear.  And surely that is something worth striving for.

Another theme is that everything changes, but that's not necessarily a bad thing.  The Fleet is not a perfect society, but it's pretty nice and has a lot to share with the rest of the galaxy.  It has some growing pains, some of them even violent (it's not all puppy dogs and rainbows), but overall the kids are going to be alright.

In terms of world building, the alien anthropologist's reports are the best source of information about the Fleet, a sort of anarcho-socialist society poor in technology compared to the rest of the galaxy, but perhaps rich in wisdom.  I was reminded of something Iain M. Banks says about the political effects of space travel: it would not encourage space empires, but rather, as he says, "socialism within; anarchy without."  Living in metal cans in the depths of space encourages a more equitable sharing of resources (in the Fleet, there is no money and everyone has food, shelter, and basic needs met just by being there), but the vastness of space makes enforcing a particular government difficult (there is some kind of loose galactic government, but no Borg Cubes or Storm Troopers in sight, just a lovable alien anthropologist).

The main trouble with the novel is that this all takes a really, really long time to get off the ground, and it can seem glacially slow until it all starts to come together somewhere in the middle.  Some of it is all a bit too "twee" (if I can be permitted some British slang), the type of thing guaranteed to make a certain type of denizen of SF fandom "squee" (if I can be permitted some American slang).   Consider a lot of the aforementioned teen angst along with the "aw, shucks, this chapter is really just a sitcom about an upper-middle-class liberal Californian family, but in space instead of the suburbs!"

But I can forgive the shortcomings, mostly because I totally understand the appeal of this novel.  It does feel great to read something like this, to momentarily forget the dystopian aspects of our world, and to hope for and work toward a future a little more like this.