Black History of the Future: Reading Delany, Mosley, and Butler 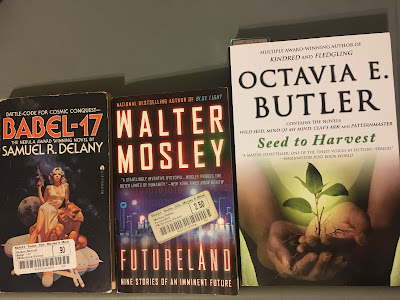 While you should read Black science fiction authors during all months, I figured Black History Month 2021 was a good chance to read books on my list by Black authors. Besides, I did another Black History Month post back in 2016, so I was overdue for another one.

Please enjoy these reviews of Babel-17 by Samuel R. Delany, Futureland by Walter Mosley, and Mind of My Mind by Octavia E. Butler!

(Note: the title of this post is inspired by another book you should read: How Long 'Til Black Future Month? by N. K. Jemisin.)

I'm sure I didn't understand everything in this novel, but I'm also sure the author is a genius. So: a typical experience of reading of Delany for me.

The basic plot is fairly straightforward (at least compared to Delany's later works like Dhalgren). In the far future poet Rydra Wong is called upon to decode Babel-17, a code of an enemy at war with humanity. She pulls together a rag tag star ship crew in her journey to the front in order to do the job (and some other things happen, not all of which were clear to me, but again, that's Delany; also, the rag tag crew is far more racially and culturally diverse than you'd find from most of Delany's white colleagues in the 1960's).

The most obvious philosophical issue has to do with Delany's reliance on the Sapir-Whorf hypothesis (aka, linguistic determinism). Does the language you use determine your very concept of reality? Heavy stuff!

That angle is dealt with by almost everybody encountering this book, so let me try something else. Besides, linguistic determinism is out of fashion among linguists (and most philosophers) these days. (For my part I can't imagine how one would know whether such a view is true, much less produce a testable claim for modern linguistics... on the other hand, the weaker version of this claim --that one's language can greatly influence one's thoughts -- is probably obvious to most people who have even slightly dabbled in more than one language).

Let's try a Buddhist angle. Buddhist philosophers infamously deny the existence of a self. There is no one enduring thing that makes you you. Ultimately there is no referent of words like "I" and "me" and "mine." In Babel-17, it turns out that in Babel-17 there is no word for "I" and thus (according to the operative linguistic determinism of the novel) when one thinks in Babel-17 one loses the concept of "I" or the self, and thus (in another philosophical leap) any sense of self-reflection. I won't spoil how this works in the plot except to say that it's delightfully clever.

But if you think about it, in Buddhism the arguments against the self are supposed to lessen one's acceptance of this harmful concept. So is this a sort of determinism of conceptual scheme, a reinscription of the philosophical bugaboo of plain old determinism? I don't think so. But, like the weaker version of Sapir-Whorf, changing how one talks and thinks can change experience and lessen suffering. This is in fact one way to look at the whole project of Abhidharma Buddhism: to redescribe human experience without a self. But this is one part of a larger Buddhist program, rather than the whole job as linguistic relativism might have it.

Bringing this back to Babel-17, I think you can still enjoy the novel without accepting the strong version of Sapir-Whorf, but the weaker version still allows for plenty of science fictional and philosophical intrigue.

Mosley is mainly known for his mysteries, but he's written a bit of science fiction as well that I've been meaning to check out for a while.

Futureland is not (as it might sound like) a short story collection. In fact, I read it more like a novel consisting of vignettes, because the stories are relatively tightly connected, most obviously by setting but also many of the same characters appear in more than one story.

Mosley takes up a lot of the tropes of cyberpunk and dystopian science fiction. A mysterious drug? Check. Unchecked corporate power that controls every aspect of people's lives, mostly to make them shittier? Check. A noir detective in the future? Check. Implausibly vast changes to the structure of society in a matter of a decade or two? Check. Big Brother is watching? You bet. A bleak warning that we ought to change our ways because a lot of this seems horrifyingly plausible given the direction of our current society? Oh, yeah.

The great thing about this book is that Mosley does interesting things with these tropes, and manages to invent a few of his own. You can also tell he's a seasoned writer of digestible prose (some of the stories aren't easy to read, but it's because of the content not the style).  I particularly enjoyed Fera Jones, a female boxer who decimates her male opponents, Folio Johnson, cybernetic detective, the Kafkaesque riff on Office Space meets 1984 with Neil Hawthore's story, and some of the really weird WTF? stuff that happens in the last story that I shouldn't spoil (especially as it may be weirdly relevant during the current pandemic).

It's also worth noting that Mosley foregrounds African Americans in most of these stories to explore how America's problematic past might evolve into the future. There's a weird new religion with a charismatic follower (another trope used effectively) that mostly recruits Black people around the world, including in the US. A Neo-Nazi organization is looming with nefarious plans while trying to present as innocuous, even hiring a Black detective to work for them (this story line maybe hits closer to home than I'd like these days).

The main function of dystopian fiction (aside from, "it could be worse" or "I could survive that") is to act as a warning. And if Mosley's grim warning of the future doesn't scare you, I don't know what will. He published this in 2001. While not everything he predicted has come true yet, a lot of the world here in 2021 isn't looking much better. The warning still stands.

Mind of My Mind by Octavia E. Butler

I read Wild Seed (the first book in story order) about a decade ago and somehow never returned to the series until now, which is odd considering that Butler is one of my all-time favorite authors.

The first two thirds of Mind of My Mind meander a bit and are clunky compared to Butler's other work (this is an earlier novel of hers), but the last third makes up for this by shifting into high gear with the weirdness of the story and the themes of ambiguous relationships that nobody does better than Butler (every relationship in her books could be labeled "It's complicated."). This novel also snuck up on me in how much it made me think, starting from an interesting, but awkward story about psychics to something deeper and more disturbing that makes you think thoughts you're not sure you wanted to think--again, classic Butler.

Mind of My Mind picks up a long time after Wild Seed with Anyanwu (now Emma) and Doro, both immortal beings originally from Africa now in America (maybe in the 1970's, but it doesn't say). Unfortunately we don't get much Emma past the first few chapters, but Doro's story is the focus here, particularly his centuries-long effort to form a race of psychic superhumans (Butler makes this more interesting than it probably sounds). He finds a promising young woman Mary, whom he encourages to grow her own community that she eventually terms Patternists. A lot of the novel is familiar territory for Butler of forming a community of outsiders, along with all the drama, love, and heartbreak that involves.

I won't spoil more than to say that as Mary's power (both psychic and political) grows, her conflict with Doro increases.

I was reminded of a story I heard about Butler recently (I think it was here). She was reflecting as a child on the typical "heroes" of history, but she wondered about her African American ancestors, like her mom and grandma, who had to navigate racism, Jim Crow, slavery, misogyny, etc. to survive. Why can't the people who survived all that be heroes, too, even if they sometimes had to do less than heroic things to survive? Once I heard that, this made a lot of sense of Butler's other novels, especially Kindred, but also the Parables and Xenogenesis series.

Just some of the other thoughts this novel raised for me: What is a community? Can the members of a community be there entirely voluntarily? Or is some degree of coercion or "that's just how it is" always necessary for community? Is an entirely free and voluntary family, community, nation, etc. even possible or desirable? How can people love those who control and oppress them? Where is the line between love and oppression? What is the role of compassion: does it sometimes require acting in ways that people don't appreciate? Or are there better, freer ways of community that we need to think into existence for the first time? Can the psychic powers of this story dramatize real world human powers: compassion, empathy, rage, love with and without complications, the give and take of energy between people?

This sentence is a great example of how Butler can affect the reader with relatively sparse prose. Anyway, it blew my mind.

"She consumed him slowly, drinking in his terror and his life, drawing out her own pleasure, and laughing through his soundless screams."