March is Women's History Month, so echoing my "Black Future Month" post, this seemed like a good chance to finish two series by two of my favorite authors: Octavia E. Butler's Patternist series and Ursula K. Le Guin's Earthsea series. Okay, so the Earthsea books aren't about the future, at least not our future.

But Le Guin's fantasy may be about my future: I hope to do some serious academic work on both Butler and Le Guin in the future (building on the article on Le Guin I've already published), so maybe this will be a seed of some future project. Echoing a phrase from Le Guin, I might even call it something like Realists of a Larger Reality.

Despite the fact that Octavia Butler is one of my all-time favorites, I somehow had never finished her Patternist series. I read Wild Seed over a decade ago, Mind of My Mind last year, and now it was time to get to Clay's Ark.

But wait: IS this a Patternist novel? You might be forgiven for thinking it is not. In fact, the connection to the rest of the series only became apparent to me when I decided to push through to the last book in the series (Patternmaster) immediately after finishing Clay's Ark. What that connection is exactly, I won't spoil here, but rest assured, it does hook back up with the main series, especially if you think of each book as something more like a self-contained snapshot of the evolution of humanity over hundreds of years.

The "Clay's Ark" of the title is an interstellar spacecraft that met an ignoble end as all but one of the astronauts became infected with a sort of virus from another planet. That one survivor makes his way back to Earth where he "infects" other humans with... well, what, exactly?

To call it a virus or a parasite would be to make it more familiar than it is. But neither is it an "extraterrestrial" in the usual science fictional sense. I don't know if I should say too much about what it actually does (and indeed not everything is explained), but I will say that it problematizes and blurs the boundaries between self and other, human and animal, human and alien, etc. If you're familiar with Butler's other extraterrestrial explorations ("Bloodchild" and the Xenogenesis series) you might get an idea that this process is at least as disturbing as it is science fictionally interesting.

How deeply disturbed you are by this novel may tell you a lot about yourself, but it also raises intriguing questions: are our children/students/mentees/descendants ever what we think they should be? Or are they always more-or-other-than ourselves? Do they always go beyond our conceptions of ourselves? Is this always as terrifying as it is inevitable?

And of course you get all of Butler's usual exploration of complex social dynamics of love/fear, freedom/dependence, etc. The depth of this aspect of her work is all the more surprising if you know that in real life she was a self-professed hermit. But I suppose that's just all part of Butler's genius.

So all-in-all, this one is an outlier in the Patternist series (what? no psychics?), and yet it may be my favorite of the series.

Oddly, although Patternmaster is the last in series chronology, it was the first of the series that Butler published in 1976.

The biggest thing you learn in Patternmaster is why Clay's Ark is a Patternist novel. The descendants of the protagonists of Clay's Ark, now called Clayarks, co-exist in a future California (maybe a few hundred years, but it's not specified) with the descendants of the protagonists of Wild Seed and Mind of My Mind. So it all comes together! And you finally get a sense of the historical breadth of the story Butler was telling: it's about the evolution of humanity over hundreds of years (or maybe more precisely: evolutions, plural).

Patternmaster might read as a sort of dystopian "Eloi versus Morlocks" kind of thing, although if you're familiar with Butler you know that nothing is ever that simple (nor was it that simple in Wells's The Time Machine!). Sure, there are the powerful psychic Patternists and the animalistic ET-hybrid Clayarks. But we discover that that Patternists can be quite brutal among themselves, especially in how they exemplify the social hierarchies that Butler was so fond of exploring in her fiction. And there are strong hints later in the novel that the Clayarks are more than meets the eye (whether more human or more extraterrestrial it's hard to say). And caught between them are the non-psychic human mutes.

Butler's descriptions of the "patterns" and the psychic powers of the Patternists can at times be difficult to wrap your mind around as are the social complexities of the Patternist society and the characters therein, but she tells a coherent enough story with enough fascinating world building to keep the reader interested.

All in all, I can't say that the Patternist series is my favorite of Butler's. That would have to be the Parable duology, closely followed by the Xenogenesis series and the standalone Kindred. But I recommend the Patternist series for any Butler fan or any reader who enjoys expanding their ideas about humanity and society as occasionally uncomfortable as doing so may be.

The Other Wind by Ursula K. Le Guin 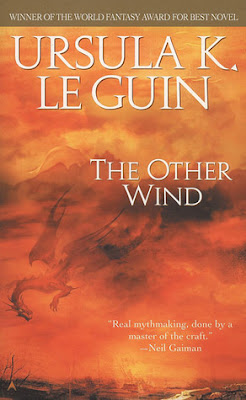 It took me a while to get into this last volume of Le Guin's Earthsea series, but once I did I was amazed all over again by the profundity and beauty of Le Guin's writing. While I think my own individual proclivities still lead me to slightly prefer Le Guin's science fiction to her fantasy, The Other Wind is a fitting end to the series and includes plenty of gems. Here's one of my favorites.

The novel is a continuation of the story "Dragonfly," the story at the end of Tales of Earthsea. The Other Wind was a bit difficult for me to get into, partly because it's been awhile and I didn't remember all the earlier details from "Dragonfly," but also because it doesn't start with familiar characters.

Instead we meet Alder, a minor sorcerer tormented by some really trippy dreams involving the dead, including his late wife, wanting to be freed from behind a wall of stones. The dreams sequences are a bit weird and it's not always clear how they serve the plot, but then again Le Guin was never all that interested in things like elaborate plots and action scenes. She's a writer of Big Ideas, and in the most beautiful way possible. Or as she once said, she's a "realist of a larger reality."

Alder is traveling in search of someone we do know: none other than Ged! Ged is still busy tending his cabbages and sends Alder on a quest where he eventually meets other familiar characters including Tenar, Tehanu, King Lebannen, and Dragonfly (Irian).

Without spoiling too much, I'll say that some major changes for the world of Earthsea are afoot. There are deep thoughts and beautiful prose about life, death, the universe, and the meaning of life. Are there dragons in this one? What happens to Tehanu as an adult? What about Ged's cabbages? Do Tenar and Ged ever get to take a walk together in the forest? You'll have to read it to find out, and this is a journey well worth making.