The Slow Pondering of Strange and Beautiful Realities: The Telling by Ursula K. Le Guin 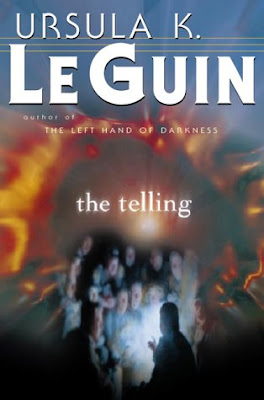 As with all of Le Guin's work, The Telling is profound, thought-provoking, complex, and raises more questions than answers.

The trouble with reviewing a Le Guin book is that anything I could say about it feels inadequate compared to what Le Guin herself has written. But let me give it a shot, anyway.

The Telling, published in 2000, is the last of the Hainish novels that Le Guin wrote. "The Hainish Cycle" is not so much a series, but a shared universe that includes some of Le Guin's most famous science fiction novels like The Left Hand of Darkness and The Dispossessed.

The main character, Sutty, herself embodies this ambiguity as a woman who fled a theocratic rule on Terra (our very own Earth!) to join the Ekumen, but who never seems quite sure about what she's doing (she harbors an ambiguity in her very name). But not being quite sure of herself is contrasted with the horror of those who are far too sure of themselves: bigots, chauvinists, and totalitarians of all kinds, religious, scientistic, political, and otherwise.

In the novel Sutty arrives on the planet Aka as an ambassador from the Ekumen. At this point Aka is ruled by a totalitarian government ruthlessly rooting out the previous cultural traditions in favor of "progress" (a nod to the Cultural Revolution in China perhaps, but not just that). And it is those cultural traditions that Sutty aims to study for the sake of the Ekumen and her own curiosity. We get an interesting trip not unlike other Hainish novels, but of course it's about the journey not the destination. Well, it's kind of about the destination, at least once it becomes clear what the destination is.

Unsurprisingly for Le Guin, we meet a somewhat Daoist philosophy/religion/storytelling tradition called The Telling. In true Le Guinean fashion, it's not anything much like a structured, organized religion (although some of it may have been in the past), but rather a loose tradition of storytellers, philosophers, and healers who travel around the countryside.

There are maybe some Buddhist elements as well, but to me it seemed like there might be some Mesoamerican influences (the idea that humans are needed for the universe to tell it's story reminds me somewhat of the Maya idea that the universe needs humans as time-keepers to bring time into existence). But at the end of the day, The Telling is not reducible to any of these influences, just as The Telling can't be reduced to any one version. One unique element: the idea that any form of debt (economic or otherwise) is to be avoided.

In addition to this sociological and philosophical delight, The Telling also raises questions about bigotry, freedom, difference, politics, religion, sexuality, tradition, and much more. And all of this relates to the deeply Daoist philosophical trend that animates so much of Le Guin's work: the folly of trying to tame reality into One Thing that we can predict, control, and dominate. As always, Le Guin encourages the slow pondering of strange and beautiful realities of which we are part but do not own.