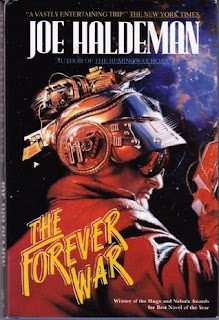 The story follows a soldier named Mandella, who we meet in boot camp. I found this to be the slowest part of the story, but luckily things got more interesting quickly.  Due to time dilation in the travels at relativistic speeds en route to wormhole type things called collapsar Stargates, a few months or years for Mandella can be decades or centuries back on Earth.  This makes for a brilliant metaphor for the disorientation many soldiers feel upon their return to civilian society.

Mandella is never really on board with the war, but he reenlists after spending some time on an Earth he no longer understands (it's a pretty shitty place a few decades after he leaves, somewhat like any of the numerous dystopias so popular today).  So he goes back in the military with his girlfriend, Marygay, and ends up going even farther away and, given relativity, farther into the future.  To say much more would be to veer too far into spoiler territory.

In addition to the emotional scars of returning soldiers, the time dilation speaks to the feeling of aging while the world moves on around you.  This is something I feel acutely as an aging college professor constantly encountering fresh crops of young whipper-snappers with their new fangled cultural references and ways of being!  The time dilation reminds us that we are all at war with time, which is of course relative to the observer's position.  It's also by far the most interesting aspect of the book and allows Haldeman to write the history of the next 1,000 years.

Suffice to say there are some ruminations on this war and war in general.  Why are they fighting?  Why can't they learn more about the alien Taurans?  How is the war the cornerstone of the economy?  Does the war make it possible for the government to control most aspects of society?

The philosophical questions are more implied than pedantically presented.  You don't get anything quite like the classroom scenes of Starship Troopers.  I honestly would have liked a little more explicit philosophy to chew on.  I'd also like more on the quote at the beginning of this review.  Which kind of Buddhism is he talking about? (Zen?  Huayan?  Yogācāra?)  What does he mean?

There's a lot to like in this book.  It's well-written.  In addition to a BS in physics, Haldeman did an MFA at the University of Iowa.  The time dilation effect works really well as a way to tell the story and to explore the book's central issues.

Still, I'm not sure how I feel about the main character's homophobia, which comes out (no pun intended) as more people in the future come to have homosexual relationships.  To be clear, it's not over the top.  He doesn't beat anybody up or even call them names.  It's mostly in his internal monologues.

Toward the end of the book, I started thinking we were supposed to laugh at Mandella's homophobia rather than identify with it.  It's also another way he feels left out of the future, especially in contrast to the hyper-sexualized heterosexual world in the first part of the book (the male and female soldiers are encouraged to have heterosexual sex pretty much constantly when not in combat, a policy which continues for same sex coupling in the future).  The ending, though, feels hetero-normative in a way that makes the whole book feel a lot less accepting than it starts to appear.  Or maybe I missed something.


Despite its faults, this is a classic for good reason, and I recommend it to anyone looking to understand the recent history of science fiction, especially for fans of military science fiction.