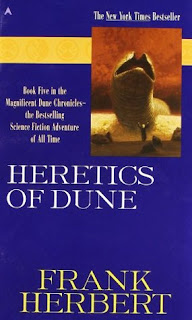 Just what do you do with the human race?:  From Golden Path to noble purpose

In book four, God Emperor of Dune, we learn about the Golden Path of Leto II, which as I noted in my review of that book, involves an answer to the question, "Just what do you do with the human race?" (a question I've borrowed from the book, Dune and Philosophy: Weirding Way of the Mentat, which is required reading for any philosophically inclined Dune fan).  In Heretics we see that Path starting to come to fruition 1,500 years after Leto's death.  It turns out that Leto kept the Bene Gesserit around all those years because he needed them to continue his work, which the Reverend Mothers Taraza and Odrade start calling the "noble purpose."  Of course, we still don't entirely understand what that work is.  That's probably the point, or at least it makes for some fun reading.

If I had to make an educated guess, I'd say that Leto II saw that his lesson of tyranny may not be completely learned and that if humanity was to survive and thrive after his lesson, it would need the guidance of the only organization with the longevity, stability, and philosophical acumen needed to do the job.   Some of this comes out more clearly in the next book, Chapterhouse: Dune, so I'll wait until I re-read that one to say more.

Speaking of the Bene Gesserit, I've always thought it's odd how the later books show relatively little change (institutionally, linguistically, culturally, etc.) in the millennia since Dune.  After all, how much has our world changed in the last 5,000 years?  Maybe the stability of the Bene Gesserit, an organization with literal institutional memory, offers part of the explanation along with Leto II himself, of course (see this article, "Grandma's Experiences Leave a Mark on Your Genes," for a real-life theory of something not entirely unlike the Other Memories of the Dune universe).


The dangers of power

Of course there's more to Heretics.  We also learn more about the Tleilaxu and the remnants of Leto's religious followers (priests and Fish Speakers).  And then there are the Honored Matres, to whom we are introduced in this book (we get more of them in the next one).  The blurb on back of my book says they bring a "heresy called love."  It's a bit more complicated than that.  In fact, I'd say it's the Bene Gesserit, exemplified by Odrade, that truly understand love of one's fellow humans.

Part of the message is that the seeking of power for power's sake is ultimately a self-destructive endeavor, especially if one uses sexual energy or familial loyalty to do the job.  This initially seems like an odd message for a series that dwells on the humorless pursuit of power at all costs, but I've always thought that Herbert and his characters are more ambivalent about power than it appears to the casual reader.  Perhaps, as the French philosopher Michel Foucault might say, Herbert wants to remind us that power isn't always bad, but it is always dangerous.

The introduction of new groups and the continued development of the familiar Bene Gesserit also touches on one of the deepest themes of the Dune books: the expansion of humanity.  The Honored Matres come from the Scattering, a literal expansion of humanity, but I have in mind the idea that humans might radically remake themselves into something still human, but also new.

After the Butlerian Jihad, the humans of the Dune universe turned away from computer technology.  They turned to themselves to make Reverend Mothers, Guild Navigators, Mentats, Face Dancers, Honored Matres, and all the glorious weirdness that fans of the books have come to love.  It's not that there is no human nature, it's that this nature is capable of expansion.  A big part of the fun of the Dune universe is contemplating just what our descendants might become.  And it's a good thing we can expand, for a species that doesn't change in a changing universe won't be around forever.  A philosophically astute reader might then wonder what the point of survival is (especially given the horrors often entailed by survival in the Dune universe) and whether at some point extinction might not be a bad thing.

That readers are encouraged to dwell on these and many other issues without dogmatic resolution is part of what makes this one of the most philosophical science fiction series of all time.