Plato Strikes Back! - Plato at the Googleplex: Why Philosophy Won't Go Away by Rebecca Newberger Goldstein 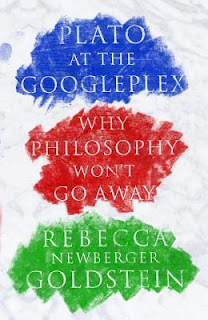 Rebecca Newberger Goldstein's book Plato at the Googleplex: Why Philosophy Won't Go Away can sometimes be a bit long-winded, but I love the schtick of having Plato visit 21st century America.  Recommended for fans of Plato and/or philosophy.


The book alternates between traditional non-fiction chapters and playful fictional chapters.  The non-fiction chapters deal with Plato (of course), but also a surprising amount of his historical context as well as Goldstein's defense of philosophy and an intriguing notion of philosophical progress.  In the fictional chapters, Plato is transported to the 21st century (having learned English apparently), visits Google Headquarters (the "Googleplex"), is a guest on a talk show about raising children, serves as a guest author for an advice column, is interviewed by a thinly veiled Bill O'Reilly clone, and visits a neurologist's lab to get an fMRI.

The non-fictional chapters sometimes go on a bit longer than they need to, but I found them to be worthwhile.  It's not at the level of professional specialists in ancient Greek philosophy, but it's maybe a bit closer to that than casual non-academic readers might like (yes, there are footnotes and an extensive bibliography).

Goldstein sets up a contemporary debate between "philosophy cheerers" and "philosophy jeerers," and she does an admirable job defending the cheerers.  I particularly like her articulation of what it might mean to say that philosophy progresses, a concept that has helped me in teaching Plato, not to mention lots of other historical philosophy, Western and otherwise.  According to Goldstein, philosophical progress is often invisible precisely because yesterday's philosophical accomplishments become ideas with which we see everything today - what was arrived at through brilliant intellectual imagination and torturous argument and in the past can become today's common sense.  This isn't to say that Plato can't be quaint or downright despicable today (e.g., the ancient Greeks' acceptance of slavery), but he had such a large influence on ethics, science, mathematics, religion, and politics in the cultures his work has come into contact with that it's almost impossible to measure how extensive that influence is, since his influence would be part of the means of measurement.

Goldstein has a PhD from Princeton and she sometimes exhibits a bit of upper-class US coastal snobbery, which is perhaps fitting as Plato was an elitist himself.  All of the characters Plato meets are in the tech industry, media, or academia. Goldstein admits - in a moment of embarrassment - to have been "addicted" to science fiction as a child, which is a segue for her to say that just as in a lot of science fiction stories you need to change just one thing about the world to make the story work, so for her fictional chapters to work, you need merely to accept that a 2,400 year old philosopher could come to life in the 21st century.  But, much like the Margaret Atwoods of the world, saying you're not writing science fiction doesn't mean you aren't.  Goldstein is just a short paragraph of handwaving time travel or quantum mumbo jumbo from having written a collection of science fiction stories herself.  This is admittedly a pretty minor point all things considered, but as a science fiction fan this kind of dismissive attitude always strikes me as a bit snobby.

My favorite of the (science) fictional chapters is probably the first one where Plato visits the Googleplex on a book tour (although I also enjoyed Plato's stint as an advice columnist and his dialogue with a scientistic neuroscientist).  Plato has a dialogue with his "handler" Cheryl and one of the Google programmers.  The programmer thinks ethics is a quaint atavism: if you want to know the right thing to do, the programmer says, you should just create a database of people's opinions and go with the most popular one!  This initially sounded completely ridiculous to me, but in this age of Big Data and blind faith in technology and Google as Source of All Knowledge, I suppose there must be a lot of people who believe something like this.  Case in point: I recently had the misfortune to watch an episode of a TV show called "Wisdom of the Crowd" where crime fighting is crowdsourced, a show that wouldn't be made without faith in technology as Solver of All Problems - these days there's an app for everything apparently, even solving murder.

Plato's "handler" Cheryl isn't so sure, and Plato agrees with her.  The point is subtle, but Goldstein has the characters deliver it well.  She puts it better than this, but to put it bluntly: computer databases of ethics will only tell you what people have said is the right thing to do, but it won't tell you what the right thing to do actually is.  This is precisely the kind of point I try (perhaps unsuccessfully) to get across to my philosophy students (who often try to Google their way out of philosophy assignments!).  Google is great for what it is, but ultimately all it does is tell you what other people have said, whether those people are worth listening to or not.

If you want to decide for yourself what really is right, how anyone really knows anything, what it means to exist, what are the best things to want in life - that is, if you want to arrive at well-reasoned views about the deepest issues of value, humanity, and our place in the universe, then you need philosophy.  As Plato might say, Google can give you a shadowy world of opinions, but only philosophy - arduous, slow, and often inconclusive at it is - can give you genuine knowledge of the true and the good.