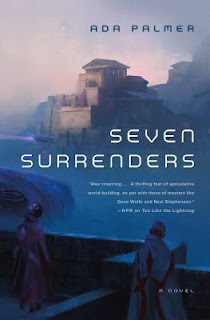 Ada Palmer's Seven Surrenders is the sequel to her first book, Too Like the Lightning, which was my favorite novel of 2016.

The "new world smell" has worn off by the second volume and I could never really follow all the levels of intrigue, but there are still plenty of ideas about utopia, gender, sex, politics, philosophy, history, religion, etc. to keep you thinking in this second book.


The world building was one of the things I loved most about the first book, especially the way Palmer developed a science fictional world with historical consciousness -- a sense of the continuity and change between the worlds of the 21st century and the 25th (with the 18th as inspiration).  (See my blog review).  Now that the basic idea of the world has been been established, the second book wasn't quite as interesting on the world building front.  This means that the plot has to carry more of the book.

And that honestly caused a bit of trouble because the plot of this one was just as confusing - if not more so - than the first one.  I will say that it comes together at the end, but it's impossible (at least for me) to keep track of it all.  The "cast of characters" at the front helps a little, but it's still really hard for me to remember who's who and why I should care.  None of the characters are all that likable and many of them are indistinguishable, although some of them are interesting (Mycroft continues to be intriguing, as well as Carlisle the sensayer).  I can't say I had much of a grasp on the overall plot until the last 100 pages or so.  But the last part of the book makes it all worth it.  It really does come together in a way I can't say without spoilers, so I'll leave it at that.

Philosophically, there's a lot going on.  The theme of what you might call an "ambiguous utopia" continues (to borrow a phrase from the subtitle of Ursula Le Guin's The Dispossessed).  The world of the 25th century is pretty nice: flying cars transport you anywhere on Earth in hours and poverty, hunger, discrimination, nation states, and war are (at least for now) things of the past.  One of my criteria for whether a world is utopian is whether I'd consider giving up my relatively comfortable 21st century life to move to that world.  In this case, I probably would want to live in Palmer's world, although I'd have to think about it more than I would for the worlds of Star Trek or Iain M. Banks's Culture, either of which I'd move to in a heartbeat.

But, of course, all is not well in Palmer's utopia.  Democracy has more-or-less been replaced by a complex system of well, what exactly?  Techno-nobility?  Benevolent feudalism?  Monarchic socialism?  Corporate communism?  It's hard to say.  Nations have been replaced by Hives, which are non-geographically located affiliations that citizens can join according to their personal preferences.  The idea seems to be that once the world is geographically thoroughly connected by transportation technology, we could organize ourselves by our values rather than the patch of dirt on which we happen to live.  Personally, I'd be a Utopian.

The catch, of course, is that the leaders of each Hive basically do what they want and play all the same Machiavellian games that royalty and head honchos throughout history have always played.  This makes for a dizzying level of intrigue that really only comes into focus toward the end.  For the record, I'm still not sure what a Seven-Ten list is, but that seems to matter less in this one, thankfully.

So is this a utopia?  Is it the best we could do?  Is this the story of a utopia's decline, or its ascent to a true utopia?  These are just some of the questions Palmer considers, and I'll be interested to see how she returns to them in the next book.

The issues surrounding religion continue.  Could humans really do without religion, or do we have personal longings that need to be fulfilled with help from "non-priests" called sensayers?  There are also some weird ... metaphysical(?) ... happenings on the religion front, which I will skip in this review, hoping they receive more complete development in the next volume.  But the deepest philosophical issues in this one are about gender.

With only a mild spoiler, dear reader, I can say that some of the characters consider the wisdom of the outright ban on old-fashioned gender associations (along with bans on religion, of course).  The idea is this: while gender certainly creates a lot of trouble for us, it does serve social and cognitive functions of organizing human experience.  Gender gives us a way to make sense of "masculine" traits like aggression, competition, etc. and "feminine" traits like nurturing, cooperation, etc.  This is a far more subtle point than it appears.  The point is NOT gender essentialism.  The characters aren't saying that all men are essentially masculine and all women feminine.  The point is that simply banning all gender associations that have developed over thousands of years without replacing them with something else leaves humans with impoverished resources for making sense of their experience.

I'm not sure what gender associations would be replaced with.  Nobody in the book does, either.  Maybe that's the point.  We have to think of something new.

I found this to be a pretty deep point, but I'm not sure what I think about it.  I've personally never been much invested in the project of "being a man" and fitting into stereotypically masculine ideas.  I have a beard more because I don't like shaving than because I want to look manly.  I don't mind admitting that I think animals or kids are cute.  I'm trying to make the archetype of the "Crazy Cat Man" into a thing.  I don't like sports, not even cool, alternative sports for American men like soccer or rugby.  I care deeply about trying to be a compassionate, kind person and not at all about pursuing power over others through competition or violence.

Of course, this is all easy for me to do, because everyone else fits me into their masculine ideals whether I want them to or not, which I'll be the first to admit makes my life a lot easier overall.  I'm not invested in masculinity, but masculinity is invested in me.  Sure, I wish I could talk to little kids in public without people thinking I'm a pedophile or make friends with women without having first to demonstrate that I'm not a creep, but then I rarely think about my physical safety and don't have to deal with sexual harassment on a regular basis.

So what to do with gender?  Maybe the characters in the novel are right that merely erasing all gender associations could be problematic.  While of course all humans are capable of compassion, putting that trait into a bundle of "feminine" traits gives us a way to organize our experience.  It's part of what makes male figures like the Buddha, Jesus, Gandhi, and Martin Luther King, Jr. so revolutionary.  And the "masculine" traits of competitiveness and self-assertion are part of what makes women with those traits so revolutionary, not to mention controversial (think of women politicians like Indira Gandhi or Hillary Clinton).  Could we have gender associations without harmful stereotypes?  Could we admit that people of all sexes and genders are capable of having these traits to various degrees?

For instance, the movement of care ethics in philosophy admits that an ethic of care tends to be thought of as feminine as opposed to masculine ethics based on abstract, impersonal principles (deontology) or calculation (utilitarianism).  (One could say much the same about movements in feminist epistemology and philosophy of science about different ways of knowing, but I'll concentrate on ethics here).  I find care ethics valuable because it starts from where we are, namely, people who already care about others.  But on the other hand, caring about principles is a way to make for a fairer society for everyone, so there's value in traditionally masculine ethical thinking as well.  I tend to be an ethical pluralist, meaning I don't think any one ethical theory captures everything about ethics.  If I'm right (which I may not be!), then maybe we need both feminine and masculine ways of thinking, while also recognizing of course that "masculine" and "feminine" don't necessarily map onto "men" and "women."

I want to stop for a moment to head off any trollish objections that I'm self-hatingly "bashing men" or "trashing masculinity."  We need people to be competitive and assertive sometimes, but we also need people to be cooperative and compassionate.  It's not so much the traits themselves, but the ways we coerce people into adopting or avoiding them based on their gender that I find problematic.

Is gender the best way to organize our thoughts and feelings about these traits? Would we be better off just dropping the whole idea of gender?  Should we replace it with something else?  If so, what?  How might our descendants in the 25th century navigate these issues?  How might we navigate them today?  The most interesting thing about Seven Surrenders is that it gives some rich food for thought on these and other topics.