So You're Going to Quote MLK? 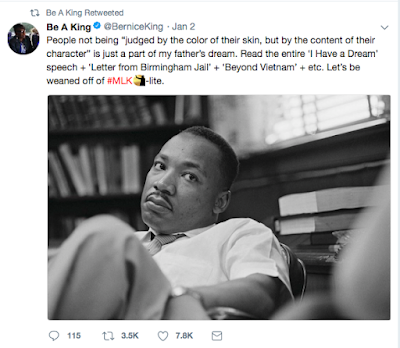 So you're going to quote Martin Luther King, Jr.? Great! Here are a few pointers.

Have you read one or more of his books?

If not, I recommend his last book, Where Do We Go From Here: Chaos or Community? It may not quite fit the more sanitized, Disneyfied version of MLK popularized during the MLK Day holiday (what his daughter Bernice has called "MLK-Lite"), but you might find some interesting stuff in there about King's opposition to war (particularly the war in Vietnam), his views on the Black Power movement (not as negative as you might think), and his economic vision for a fair and just world, including the concept of a guaranteed income for all people.

If you're not going to read one of his books, have you read or listened to the entirety of one of his speeches?

If not, here's a good place to start with videos of five major speeches including not just "I Have a Dream" but also "Beyond Vietnam: A Time to Break the Silence" and his last public speech on the eve of his assassination, "I've Been to the Mountaintop." (Also, remember that he was in Memphis to support a sanitation worker union on strike.)

Okay, let's be honest. You're probably just going to read "I Have a Dream." It's a great one! No doubt about it. But have you actually read the whole speech?

If not, you can read the text here. Keep in mind that the speech begins by explicitly discussing the history of slavery and its continuing legacy in America. King uses the image of a promissory note for freedom given by the US Constitution and says, "It is obvious today that America has defaulted on this promissory note insofar as her citizens of color are concerned." The economic imagery is apropos given that he was in Washington, DC for a March for Jobs and Freedom.

And did you catch this line? "We can never be satisfied as long as the Negro is the victim of the unspeakable horrors of police brutality."

Getting even more honest, perhaps a bit embarrassingly so for both of us here, maybe you're not even going to read that whole speech. Maybe you're going to focus the (rightly) famous bit about judging people by the content of their character. But did you at least read that whole sentence?

If not, here is that famous sentence in full: "I have a dream that my four little children will one day live in a nation where they will not be judged by the color of their skin but by the content of their character."

Great stuff! I want to live in that world, too!

Did you notice the words I put in bold there? Do you think this day has really arrived? If so, have you seen how at least two of these very children mentioned (Bernice King and MLK III) are regularly subjected to racist abuse on Twitter, often in the form of white people explaining to them what their father really meant about Black people?

Sure, but that's just Twitter. There are jerks there. Fine. Have you looked at actual statistics for things like incarceration rates, life expectancy, infant mortality, etc. by race in the US? Have you listened to actual Black people in America in 2022 about their life experiences?

Can you really say we have reached the point where everyone is "not judged by the color of their skin but by the content of their character"? If not, what should we be doing to move toward this future? Can we understand how to get there unless we understand where we are and how we got here? Might Dr. King have a lot to teach us about that, at least beyond a hasty reading of one sentence in one speech?

PS: Maybe I should come clean that this is mostly directed toward my fellow white Americans. I didn't say that because part of being white for most of us is not liking your whiteness commented upon. Weird, I know. I mean, it's right there and pretty obvious for a lot of white people. This isn't to say that white people shouldn't be judged by the content of their character, but rather that one of our privileges in the US is that we tend to already be judged by the content of our character rather than our race. But not everyone has that experience. MLK didn't. And as he said, where do we go from here?

PPS: Check out some of my previous MLK Day posts like this one from the pre-pandemic part of 2020.

PPPS: Happy Belated MLK Day 2022! Here are a few photos I took on the day.