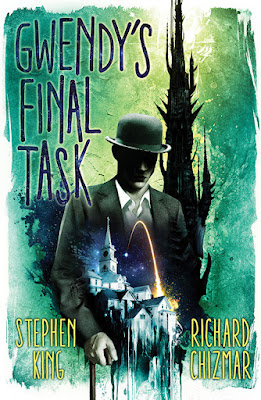 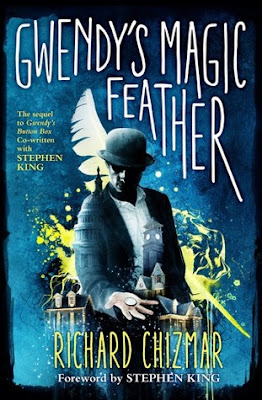 I enjoyed the first Gwendy book and meant to read this second one for a while. Then when the third book came out recently and I heard it had explicit Dark Tower connections, I figured I should finally read this second book, too.

The story in book two continues with Gwendy as an adult and US Representative home in Castle Rock for the holidays. She is entrusted once again with the Button Box by the mysterious Richard Farris. Strange things happen in Castle Rock (as is usual there, I suppose), and we learn more about Gwendy, her parents (who are retired in Castle Rock), and her husband (who is away on assignment as a photo journalist). And all the same ethical issues concerning the Button Box from the first one are there, although it's interesting to see how a mature adult Gwendy handles it. And what's the deal with that Button Box anyway? We get a few more clues here, but there's still plenty of mystery.

Two interesting things about this one: It takes place in 1999, which doesn't feel to me like it's that long ago, but really was a long time ago in some ways (No social media? Print media is a big deal?). It's very much in Stephen King's world of Castle Rock, but Chizmar has his own style. Now, some readers may be put off by this, but I found that I rather enjoyed a glimpse into a Stephen King world through the lens of a different authorial style, although it's hard to put my finger on what exactly is different about their styles.

Onward to Gwendy's Final Task for some Dark Tower content!

This last book in the trilogy, co-written by Stephen King and Richard Chizmar, wraps up Gwendy's story beautifully, all with connections to IT and the Dark Tower series. As a Tower Junkie, it would all be worth it for me just for the Tower connections, but I can honestly say I loved how it brought Gwendy's story to a close with deep thoughts on life, death, and other worlds than these...

It's 2026 and Gwendy is now in her 60's, a US Senator from Maine, and an unlikely astronaut dealing with possible early onset Alzheimer's. The Button Box has come back to her again with a mission to destroy it, which requires a trip to space, which she can do by pulling some strings as a US Senator.

I loved the space stuff. Stephen King has occasionally delved into space travel in the past (the short stories "The Jaunt" and "Beachworld" come to mind), but it's not his typical thing (I'm not that familiar with Chizmar's work, but I think it's mostly horror of an earthly variety). The space stuff felt reasonably realistic, although this isn't The Martian or some Engineer's SF or Hard SF. We even learn more about a few of the real astronauts (my favorite is the "Bug Man") and one obnoxious billionaire who's also along for the ride.

The IT connection: there are some scenes in Derry, which is still as miserable a town as ever.

And the Dark Tower stuff? It's there. I don't want to give spoilers, but it will make any Tower Junkie giddy with delight. Almost all of King's work is related to the Tower in some way, but few so explicitly as this. Gwendy is most definitely on some level of the Tower or other doing her part to save this world and worlds other than these.

(It also prompts a metaphysical question for me: the "worlds" of the Dark Tower are all planets that support human life, but does each of those planets have a vast universe around it like ours? I always assumed they do, and that the whole thing with the Tower and the beams is a metaphor for some deeper reality of the connection between universes in the incomprehensibly vast multiverse, but then this metaphor seems pretty straightforwardly real in the books, or just what is going on when Roland walks up to a physical tower? Maybe these are the wrong questions. Maybe I'll have to think about them next time I read the primary series.)

And the final task? Gwendy's last scene is one of aching beauty of that journey into darkness that is the fate of us all in some way or other.