Cozy Alien Truckstop: The Galaxy, and the Ground Within by Becky Chambers 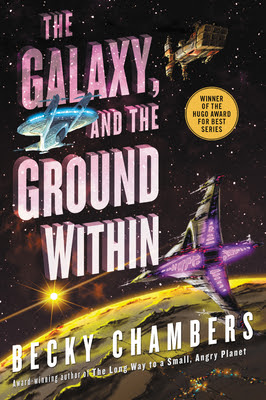 Reading Becky Chambers is like having a nice cup of hot cocoa under a cozy blanket. As I said about one of her other books, it's not space opera, it's space chill-wave. But it also makes you think and feel new and interesting things. While this isn't the only science fiction book I've read with almost entirely non-human characters (Iain M. Banks's Look to Windward comes to mind), Chambers does really interesting things with this idea, like exploring ideas of otherness and forming relationships across lines of difference, and maybe the most amazing thing is that she does all this without giving up her patented coziness.

So what does happen? Honestly, not a whole lot. Or at least it looks that way at first. Several characters of various alien species are stuck at a sort of interstellar truck stop due to an emergency in orbit of the planet. Their intrepid host, Ouloo, and her child Tupo do their best to make their guests comfortable during this down-time. It's a sort of "bottle episode" of a novel.

While there is some drama of a more conventional sort that I won't spoil, our heroes are not exactly, well, heroes. They are waiting for the emergency to be handled by the experts just like everyone else. In the meantime, they eat cake, have parties, visit a child's delightful amateur natural history museum (my favorite part!), discuss humans' peculiar custom of eating cheese, and get to know each other and either others' cultures.

The xenobiological details of each species are fascinating, but you have to slow down and keep reading. You don't get everything all at once. Just as the emergency causes our characters to slow down, Chambers's style here forces the reader to slow down, which is especially difficult perhaps for contemporary SFF readers accustomed to briskly-moving plots.

But when you slow down and pay attention, there's quite a lot going on. A group of strangers of differing species become... well, friends, I suppose. Or maybe even family? Or something we humans don't have concept for?

It's not that that they all sing kumbaya and get along all the time. They have some serious disagreements about galactic politics and some mysteries remain, but I feel like part of the message here is that some understanding of the other is possible and that understanding does not entail agreement. This is a lesson I think many of us struggle with here on Earth, although I'm not saying one should empathize with Nazis right now or anything. I'm thinking more of "getting along" here as a long-term goal for all of humanity.

Maybe the deeper point is this: If a group of aliens from different species can get along well enough to eat cake and talk about their feelings, why can't we humans learn to get along here on Earth?

So far this might be my #1 pick for the Hugos just for the ground it breaks so quietly and confidently, or really more like seeping into and permeating the ground before you realize it's there. But I have a couple more Hugo nominees to read.