I often say that my #1 dream job would be to write the fortunes for fortune cookies -- and to do so on a tiny typewriter.  I'm only half joking (okay, more like a quarter joking).  I love the idea of getting a little intellectual morsel along with a tasty cookie, not to mention lottery numbers and the fun of adding "... in bed" to the end of the fortune. 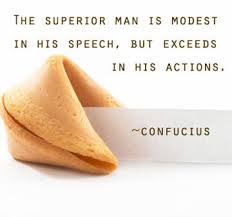 This blog post won't provide edible cookies or lottery numbers, but I have written some little morsels that might provide material for your mind to ruminate (whether you add "... in bed" is up to you).

According to Norman Malcolm, Ludwig Wittgenstein once said that "a serious and good philosophical work could be written that would consist entirely of jokes (without being facetious)." (One wonders if either Malcolm or Wittgenstein were joking).

I once wrote a short appendix to a philosophy paper consisting entirely of jokes (with middling results), but I think one could also do philosophy consisting entirely of fortunes.  I'm particularly excited about this since I'm teaching a bit of Chinese philosophy in my Asian Philosophy course this fall, which gives my students and me the chance to see if Confucius really said what fortune cookies say he said.  And yes, I know that fortune cookies aren't actually Chinese.

Since yesterday and today have marked Independence Day in Pakistan and India respectively, I should mention that I'm covering Indian philosophy in my class as well.  Readers wanting to admire South Asia's philosophical heritage might read these fortunes as classical sūtras/aphorisms to be expounded upon by the reader.

So here is my attempt at fortune cookie philosophy, arranged loosely according to topic, starting with science fiction and going into other topics: critical thinking, politics, philosophy, life, the universe, and everything.

Whether tomorrow will be a utopia or a dystopia depends in large part on our attitude today; hence, the importance of science fiction.

Let’s hope that people in the future will think people today are living in a barbaric dystopia.

What if the human race decided that poverty, war, exploitation, and bigotry were just bad ideas?

Everyone has a right to her or his own opinion, but this doesn’t mean that all opinions are right.

The first step to dehumanizing a person is to believe that you have nothing to learn from that person.

You can tell a lot about people's worldviews by what they see as the biggest problems in the world, their country, their neighborhood, and their lives.

People are far more likely to learn to live with their disagreements than they are to agree about everything.

The question isn’t whether you will change the world, but how. 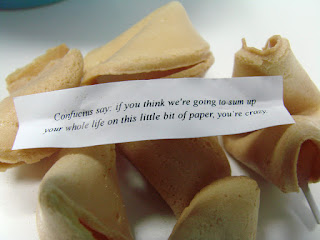 What would the world be like if everybody actually followed their religion?

Pragmatism is essential in politics, but optional in philosophy.

Too much philosophical hero worship is bad for one’s philosophical development (Nietzscheans and Wittgensteinians are especially at risk).

Realism, in its most basic philosophical sense, is the hunch that the universe doesn’t owe us anything.

Epistemic humility, thoroughly pursued, leads to skepticism.  Ancient skeptics saw this as a good thing.  Should we?

People who get bored easily are boring people.

Life is too important to take entirely seriously.
Posted by Ethan at 9:37:00 AM