Puppies as Conspiracy Theorists: Why the Sad/Rabid Puppies Lost and Why This is Good for Science Fiction

If you haven’t been following the strange case of the Sad Puppies and Rabid Puppies and the Hugos, see my previous posts here and here.  If you’re not aware of how the Hugo voting turned out, see the official results here and commentary here.

The evidence is overwhelming: the vast majority of Hugo voters rejected the Puppies.  As Arthur Chu observed at this year’s Worldcon, the Puppies don’t represent the majority of fandom.
Some Puppies claim that their defeat is explained by the fact that science fiction and fantasy fandom is controlled by hyper-liberal SJWs (Social Justice Warriors), SMOFs (Secret Masters of Fandom), and CHORFs (Cliquish Holier-than-thou Obnoxious Reactionary Fanatics).  Within this acronym-laden hellscape, a conspiracy was forged that continues to operate at the deepest levels of fandom.  Or so say the Puppies.

But as George R. R. Martin points out, it’s likely that most Hugo voters of all political stripes simply found the Puppies to be obnoxious.

Responding to a Fake Conspiracy with a Real Conspiracy

After reading pieces such as this one by Alexandra Erin, this one by Foz Meadows, and this one on From Couch to Moon, it occurs to me that the irony of all this is that the Puppies, in their efforts to stop what they imagined to be an SJW Conspiracy to Control the Hugos led by the SMOFs created their own real conspiracy to control the Hugos led by Larry Correia, Brad Torgersen, and Vox Day.

And like most conspiracy theorists, some Puppies are now taking clear evidence against their belief that the SJW Conspiracy exists to be evidence in favor of how deep this conspiracy goes.  (See, for instance, this article by Milo Yiannopoulos that includes reactions of the head Puppies). 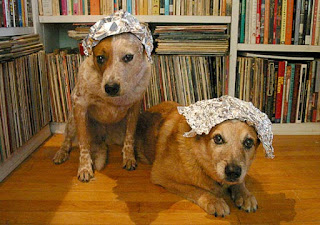 If my conspiracy theory comparison is right, we shouldn’t expect this Puppy business to end any time soon, nor should we expect any amount of evidence to change the minds of the hard core of the Puppy faithful.  I predict that less committed Puppies will lose their bark, and the hubbub of media coverage and divisive fan discussions will fade away.  Still, the Saddest and most Rabid Puppies will continue barking even if they may be relegated to the tinfoil hat-wearing contingent of fandom.

There’s a big difference between the Sad and Rabid Puppies.  I give the milder Sad Puppies the benefit of the doubt that they aren’t doing this out of any conscious bigotry.  As Eric Flint points out, some on my side of this issue (Happy Kittens?) have occasionally misrepresented the Sad Puppies.  Flint also notes that there has been a greater divergence in recent years between the science fiction and fantasy books that sell best and those that win Hugos, although this is due to a variety of factors (greying of fandom, and so on) that have nothing to do with any SJW Conspiracy.

To be clear, I completely disagree with the Sad Puppies that social justice issues or concerns about diversity should somehow be irrelevant or off-limits in science fiction and fantasy and that there is an SJW Conspiracy to Control the Hugos.  Still, I doubt that most Sad Puppies consciously intend to curb diversity in the field: as long as you’re not into all that SJW stuff or obeying the dictates of the SMOFs, mild-mannered Sad Puppies don’t seem to care about your race, gender, sexual orientation, and so on.  Rabid Puppies like Vox Day, on the other hand, are pretty clear that limiting diversity is their explicit intention.

A Puppy by Any Other Name is Just as Annoying

Whatever their conscious intentions might be, the Sad Puppies’ success would have the effect of working toward limiting diversity in the field.  Even though there are vast differences between Sad and Rabid Puppies (and I don’t know why the Sad haven’t done more to distance themselves from the Rabid), the end results of the efforts of both groups would have looked similar.

White male heterosexual authors do of course attract diverse types of fans, and there are several Puppy-approved authors who are women, people of color, and so forth.  However, by encouraging one kind of story at the expense of others, even the gentlest of Sad Puppies are saying in effect, “you can be who you are, but you have to like our kind of stuff, which – lo and behold! – happens to be the kind of stuff that has been typically (but not exclusively) the province of right-leaning white men.”  In other words, you are welcome to be from diverse backgrounds, but you shouldn’t bring diversity to the content of the genre itself in terms of themes, ideas, or topics (a similar attitude about diversity is present among many in the academic discipline of philosophy).
In retrospect, it’s probably telling people what type of material they ought to enjoy that annoyed Hugo voters most of all.  The Puppy Conspiracy was telling people what to like, while the SJW Conspiracy, being a figment of the Puppies’ imagination, never did.  This, more than anything else, is probably why the Puppies lost.  And I’m glad they did.

Why Diversity Matters in Science Fiction and Fantasy

As I’ve argued before (here and here), diversity should be celebrated and encouraged, both because it’s a matter of justice to create opportunities for everyone and because it’s epistemologically important for all of us (even people like me – straight white cis gender male space opera fans) to try to understand the perspectives of other people.  We all gain in knowledge when we make these attempts, and science fiction/fantasy from diverse perspectives is a good way to do so.

For science fiction and fantasy, imagining diverse futures, presents, and pasts in this and other worlds is both more true to who we are as human beings and to what we might hope to become.  As Mary Robinette Kowal and others have argued, the fact that the majority of Hugo voters rejected Puppies of both kinds is an encouraging sign for the future of fandom and for the potential of what science fiction and fantasy can do for everyone.