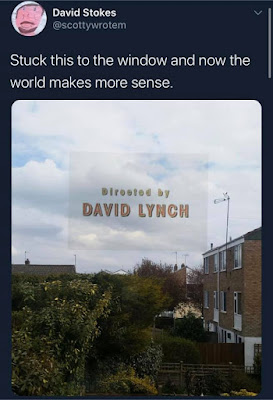 Can a joke be more sad than funny? Let’s see.

Everything is fine. … April Fools’…


Today I finished an article that I started reading before the pandemic. It was one of those tabs I kept open and for some reason never read. Another thing I was hanging on to from the before times, ironic perhaps because the article is about Henri Bergson’s philosophy of change. I did have to close the tab and reopen it after restarting my computer, so maybe that’s a little bit Bergsonian.

Today was the due date for filling out the 2020 US Census. It was online. Ten years ago I think I filled it out on paper in Albuquerque. 20 years ago in St. Paul. 30 years ago my mom filled it out in Brooklyn Park, MN. 40 years ago… I was three so I don’t remember but I guess I lived in Robinsdale, MN. In 1990, 2000, and 2010 I thought it was pretty cool (in 1980 I thought R2D2 and Buck Rogers were cool, so not much has changed). The census is like voting: it’s one of those civic duties I enjoy immensely.

I just checked this website and there are now officially over one million confirmed COVID-19 cases worldwide and over 50,000 deaths. The US has over 235,000 cases and over 5,600 deaths. 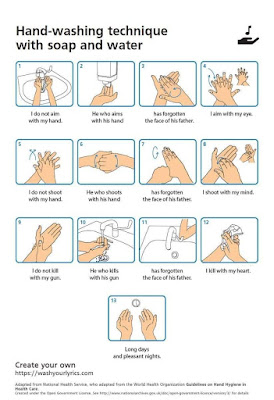 Until several weeks ago I was forming secret plans for some epic road trips to visit some of the states I haven’t visited yet, like Montana, Idaho, Maine, etc. And I was supposed to be going to Utah for a conference this month. Luckily my other secret plans involve reading books (particularly a re-read of Stephen King's Dark Tower series) and trying not to work too hard.

I was supposed to have a really busy April, with bringing a visitor to campus yesterday and today, giving a keynote at a symposium in Kennesaw, GA on April 10, a conference in Salt Lake City April 16-17, and then finals right after that. This sounds a bit exhausting, honestly, but I was looking forward to it. Welcome to our new, quieter times, which are exhausting for other reasons, I suppose.

Some beliefs I had in my late teens that I’m not sure I ever stopped believing: Farmers and janitors are the most important people in our civilization. Nobody needs more than a million dollars, and anything over that would ideally be taxed at 100%. There is no necessary relation between hard work and economic success.

Now I would include truck drivers, grocery workers, healthcare professionals, and others who we’re finally coming to see as “essential employees” in my list of most important people. But I don’t think I’d change the others.

I would hope that some of these ideas will be more seriously re-considered, particularly this idea that one’s importance to society is based on one’s pay and one’s pay is based on one’s skills (or the marketability of those skills). There is no necessary connection between any of those things, something that was obvious to me from watching the economic struggles of my family and other people growing up. I would like to think that a more humane way of thinking about the economy will emerge from all this, one that responds to actual human need rather than greed and the so-called “invisible hand of the marketplace” (which it turns out is actually just the all-too-visible hand of the wealthy and powerful).

This is my hope, anyway, but like many of my hopes I don’t quite believe it will happen. It could happen. But will it? It is just as likely that things will get much worse in the next few years or decades, something that the global political turmoil of the 2010’s has already taught us.

Yesterday we finally got a stay at home order from the Governor of Tennessee, and the Mayor of Chattanooga issued a shelter in place order. (We've been sheltering in place for weeks, anyway). All these announcements from the President, Governors, and Mayors about how long we’ll be social distancing or sheltering in place remind me of the announcements the pilot gives you when you’re sitting on the runway and there’s a “small mechanical problem” and “we should be on the runway in about 15 minutes.” And then 20 minutes later the captain comes on again and says it will just be another ten minutes. And so on until it’s been over an hour and you’re still on the ground. We’re going to be grounded for a while (maybe “grounded” in the sense of having to stay in your room and not playing with your friends is more apt).

Tonight Beth and I listened to a livestream of LeVar Burton reading Neil Gaiman’s story “We Can Get Them for You Wholesale.” Despite a few technical difficulties, it was delightful. LeVar Burton is a galactic treasure.

A post on social media reminded me that April 4 is the anniversary of when MLK was assassinated in Memphis in 1968. Sad times.

I was sitting out on the porch doing a little quarantine Saturday day drinking and reading a novel (Unburning Alexandria by Paul Levinson: Time travel! Hypatia!). We live in the upstairs duplex next to a fairly busy intersection. I’ve noticed lately that while we still have plenty of traffic, there’s less than in the Before Times.

It was quiet. I had a Godfather (Amaretto and Scotch). I was reading a fun, geeky novel. I felt relaxed, like I had time to think. I was going to have a busy, exhausting April of travel to conferences along with the harried time of finals. Now my April schedule has opened up. I wondered if other people feel this way, like maybe the human race will finally have a chance to chill out and think about what matters.

But then I immediately felt guilty for having this thought. What about the people dying and suffering in the midst of this quiet?

It’s not like I have a teleological view of history. It’s not like the Coronavirus exists for the purpose of giving people quiet time to think. It’s not for the sake of nature (as those eco-fascist memes claim). I don’t believe this is all part of some plan, that you need the bad to know the good, that it’s all okay because there’s a silver lining, or any other such knee-jerk platitudes. The unvarnished truth as far as I can see is that this is an unfolding human tragedy, plain and simple.

But this is where we are, through the non-teleological forces of plain old causation. Life is quieter for some of us lucky people who don’t have small children or difficult home lives, who are not sick, economically vulnerable, or on the front lines as essential workers. I’m not trying to downplay the fear and anxiety we’re all collectively feeling, either, but maybe we could try do the best we can to get some rest and do some thinking in these quiet, terrible times. 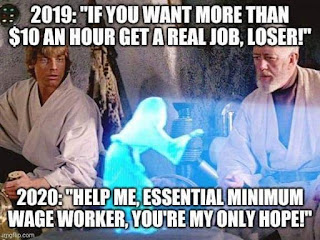 Should I, for the sake a more nuanced aesthetic and historical appreciation, start with the original film of a series and work my way through the oeuvre in release order to the later, more sophisticated films, or should I just dive right into Leprechaun in Space and Leprechaun in the Hood?

Anyway, we got a free trial of Cinemax, and they have all the Leprechaun movies.

In other free trial news, I signed up for a free trial of Shudder, which has been great. I particularly loved the documentary Horror Noire: A History of Black Horror, but they have a lot of great stuff, including the new Creepshow and Joe Bob Briggs’s specials (he’s a regular featured guest at the Chattanooga Film Fest, which was supposed to happen next week…).

Today I got my official notice that my student loan payments are suspended through Sept. 30 and won’t be incurring interest during this time. Like most Americans who went to college, I have student loan debt, and like most people who did graduate degrees, I have an awful lot of it. So… yay? Normally I would be ecstatic about this, but it’s hard to get ecstatic about much these days. Still, I guess it’s something. I can maybe give some of that money away (to charities or this app that lets you tip un- or under-employed service workers). Maybe I’ll save some for whatever all of this will bring down the line.

More good news: during my lunch break I discovered that there’s a new season of Future Man on Hulu. I’ve been looking forward to this one for a while, but of course my elation is somewhat dampened by the global epidemic. But still.

My college is hiring for a new Dean to start in the fall. I was thinking about the candidates and how the new Dean will almost surely be faced with implementing draconian budget cuts. This fills me with a lot of dread. As I discussed in a previous entry, the next few years are going to be tough in academia (and of course in other areas, too).

The 2020 Hugo Nominees are out today! Congrats to all the nominees! A few people I kind of but don’t really know are nominated. When I’m not thinking about the Hugos, I tend to read mostly old stuff. And then around late May or June I remember that I’m trying to be a responsible Hugo voter and I should really read all that stuff. So, anyway, I have just gotten a rather large reading assignment.

For a few minutes last year I contemplated going to New Zealand for Worldcon this August. Finances and schedules quickly disabused me of that notion. I guess they’re now doing a virtual con, so… you never know. Might be interesting. But here’s a sad thought: How much real world interaction are we going to lose in the long term as organizations realize how much cheaper virtual meetings are?

These days I mostly interact with my students via discussion boards. A lot of them provide really in-depth, thoughtful posts, especially in my upper-level class where these posts have replaced a weekly in-class writing assignment. Occasionally there is even something like actual discussion. The upper-level students get a few points for their posts, while the lower-level posts are credit/no credit. My lower-level class has some deeper posts and discussion, but there are also a lot of going-through-the-motions performative posts (a lot of, “I like the way you said (brief overview of class material). I agree.”) Normally this would kind of annoy me since my actual job is to get students to think about things (I would also normally require both a post and a reply to a classmate’s post), but I keep in mind that for many students just writing anything at all right now is an accomplishment in itself. I’m just trying to get them through the semester.

Some things I’ve been missing lately: movie theaters, bars, restaurants, going for walks without constantly calculating how to best avoid moving within six feet of another human being. 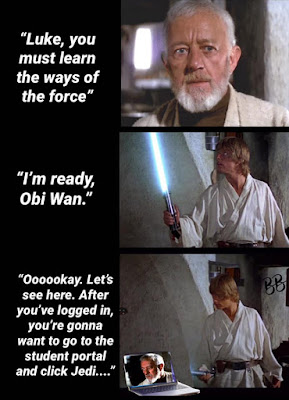