The Dogged Persistence of Fate: Cujo by Stephen King 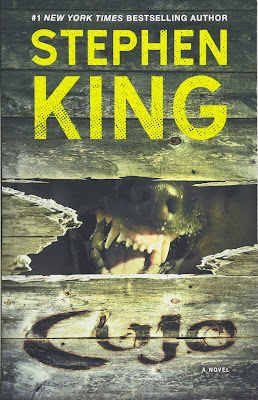 Cujo is not my favorite Stephen King novel, but not my least favorite, either. This is vintage 70's/80's King. The characters are a bit less vivid for me than his characters usually are, but there's a heavy meditation on fate and chance, cause and effect. And that ending... it's a gut punch, and Uncle Stevie does not pull his punches here.


This is one of those A-List King stories that has permeated popular culture enough that the story is vaguely familiar even to people who've never read it or seen the movie. (I've recently made it my goal to get through all of King's A-List most popular novels; I think I just have one more: Christine). Stephen King fans will appreciate that the novel is set in the fictional town of Castle Rock, Maine (see also Needful Things, The Dead Zone, Gwendy's Button Box, Elevation, etc., not to mention the TV series Castle Rock).

Cujo is a loveable St. Bernard who contracts rabies in a chance encounter, and through some complicated turns of events (some that King strongly hints may be supernatural), he ends up terrorizing at least two families, each one with plenty of pre-existing drama. Most of the family drama is done well enough, although for me the characters aren't quite as compelling as King's characters usually are.

It all leads up to an ending that... well, I don't wan to spoil it. But be ready.

Through all the dread and horror, the book got me thinking about how bad things happen. Do they happen for a reason? Depends what you mean by "reason." Do they always serve some ethical or teleological purpose? That, at least to me, seems hard to believe. I mean, who the hell do we think we are that the universe revolves around us?

But if by "reason" you mean "cause," well, then, I think there are always causes (whether causal determinism is strictly true, it seems that something like it is true above the quantum level). Shit happens, yes, but it doesn't happen out of nowhere. "Chance" is just what we call causes we don't completely understand. "Fate" can mean, as I think some ancient Stoics took it, to just mean the dogged persistence of the causal order. Fate need not involve any conscious plan, divine or otherwise.

In Cujo, it's impressive to see how King sets up the dominoes of causation to get them all to fall into that ending. Granted, Cujo is a novel, so this is deliberately set up by an author (even if King now claims he barely remembers writing it due to his cocaine use at the time). But as King says, "we make up horrors to help us cope with the real ones."

We live in a world where bad things happen due to causes but seemingly not for any purpose. Kids die, homes are destroyed, people are emotionally devastated, lives are changed forever. Such is the universe we live in.

Much like the horror of Cujo, the current horror of our global pandemic may or may not have something to do with bats. I'm reminded of Albert Camus's concept of absurdity. This is one of my favorite philosophical touchtones when it comes to horror, and probably one of the deeper reasons I like horror so much. Horror connects with a problem we all deal with in some way: How to deal with the fact that life isn't all puppy dogs and rainbows? What to do when those rainbows fade and those puppy dogs turn rabid?

King never shies away from horror (this is Stephen King!), but in some of King's work you get the idea that through all the horror at least some good people will be alright even if scarred (The Stand is a great example). In Cujo and some of his other early novels (especially Pet Sematary) the situation is far less clear. These characters may be destroyed even if they live. And in this vast silent universe of ours sometimes that happens. There is a dark comfort in reading about such tragedies. Maybe it helps us to deal with the tragedies here in our world.