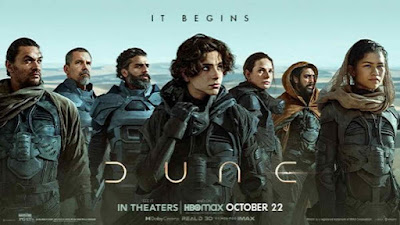 I've been excited for the new Denis Villeneuve adaptation of Dune ever since I first heard about it a few years ago. If anyone could do right by one of my favorite novels, I figured it was the director of Arrival and Blade Runner 2049. I knew I would be seeing it. What my prescient vision didn't see, however, is what sort of world I would be seeing it in.

But the promise of Dune drew me to a local IMAX theater to behold it on the big screen with big sound, pandemic or not. I wore a mask (of course), silently lamenting the lack of mask discipline of many of my fellow movie-goers while sitting as far from them as possible. I must not fear. Fear is the mind-killer...

So ... what did I think? As my prophecy could have foretold, I need to think about it some more to give a full review. But here are some initial non-spoiler-y thoughts.