Why I Love Dune 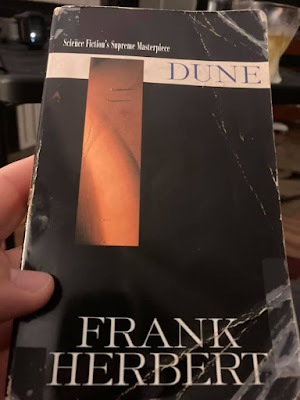 I recently re-read Frank Herbert's Dune to get ready for the new Denis Villeneuve film adaptation. I was thinking of a way to review a book I've read several times over 30 years, but I'm not sure that makes much sense.

I did notice this time that, contrary to my previous review, Paul does question his own actions in the middle of the book, even if Jessica questions them more. But... what do you say about a classic that hasn't already been said?

So instead I thought I might say a bit about why I love Dune so much, why I've returned to this series over the years as one of my all-time favorites (and maybe as a bonus why I'm excited about the new Villeneuve film adaptation).

When I first read Dune at age 15 (the same age as Paul at the beginning of the book), it took awhile to get into. There are lots of words that aren't explained in the text, not to mention quotes from fictitious books by a character who doesn't show up in the main narrative until the very end. There are no familiar landmarks of contemporary culture--no McDonald's, no rock 'n roll, no television (just.. film books?). The first third or so of the book is a bit slow. You feel like you're being set up for something, but you can't make enough sense of anything to have much of a clue what that is.

And at some point, I must have flipped to the back of the book and discovered the appendices and glossary. This changed everything for me. To steal a trick from the master himself in one of these appendices, I should write it like this:

The idea of a novel with a world so rich that it required its own scholarly apparatus of appendices and glossary blew my goddamn fifteen-year-old mind. In some novels such things would be pretentious. But Dune actually needs all that. Even though I wouldn't understand for a long time after my first reading that a lot of those terms are derived from Earthly words and concepts, the sense that this was a world of vast and deep multicultural origins sifted through tens of thousands of years of human history... goddamn.

While there are legitimate issues of Orientalism, cultural appropriation, and white saviorism to consider in Dune, it's a feat of imagination the likes of which I had not really encountered. And indeed, one I have seldom encountered since. There really is nothing like Dune.

In something I was writing recently (a chapter for a forthcoming book on Dune and Philosophy from Blackwell), I also considered that part of Herbert's effect on me was that he imagined a world that was not solely, or even primarily, based on the cultural and intellectual histories of Europe and "the West."

This shift in my thinking may have guided me over the next decade to think of philosophy as a human endeavor rather than merely a Western one, which ran contrary to most of the discipline when I arrived in college a few years later and to a shockingly similar extent still today. This is one of those post hoc stories that may or may not be true, but it's probably not much of an exaggeration to say that Frank Herbert is at least one of many causal factors that led me down a path to specializing in Buddhist and Indian philosophy.

As much as I love the Dune universe and Herbert's world building, I wouldn't actually want to live in that world. It's all so dreary, and most people are at the mercy of the plans within plans of scheming royalty. And why do we have royalty, anyway, so far in the future?

Contrast this to say Star Trek, or Iain M. Banks's Culture series, worlds I would jump to in a heartbeat if it were possible.

Utopian science fiction gives us something to hope for, or as Mary Midgley puts it in one of her brilliant essays, it's like a search light scanning the darkness looking for places we might go. But Dune doesn't do that. At least not for me. Sure, the superhuman abilities of many of the characters are interesting, but they are after all only available to a small few with wealth, privilege, or benefit of Guild, Mentat, or Bene Gesserit training.

Dune, however, asks a lot of interesting and deep questions that more utopian science fiction can't easily ask. Here's a sample off the top of my head. There are many more.

What if we got rid of computers? What if we remade humanity instead? Would this force us to ask what it really means to be human? Are social hierarchies and their attendant political and economic systems inevitable? How are political structures made, perpetuated, and unmade? Are there inherent differences between sexes/genders? How will past and present cultures, languages, religions, philosophies, political and economic systems, etc. evolve into the far future? Would our descendants in the unimaginably far future be recognizably human to us?

How does all this create what I call a historical consciousness, a sense that we are links on a vast chain of humanity into the past and future? How do "mystical" experiences of oneness with the universe as well as ecological thinking reshape us and our vision of our place in the universe? Will we as a species be around long enough to discover sand worms, spice, and semuta if such things are out there? How much of our meaning as individuals is tied up in our meaning as a species? (the last few questions come up more in the later books, but you can catch prescient glimpses of them in the first book).

To be clear, I don't always like Herbert's answers to these and other questions. Some of the ideas about human nature or sex and gender that emerge in the books are... to put it mildly, not where I'd go. But whether I agree or not, I always feel like I've changed somewhat for having faced the gom jabbar of Herbert's philosophical questioning.

And maybe what I appreciate most deeply about the Dune series is that I feel like this is exactly what its creator wants me to do as the reader. Herbert doesn't seem to think his work is diminished by his readers choosing their own path at the end of it. In fact, if you carefully read the series, the value of being open to new ideas, new modes of being as vital to the very survival and flourishing of humanity is precisely what the whole thing is about.

And I'd like to think Herbert occasionally wrote with a wry smile, knowing that his readers might see that a willingness to rethink received wisdom would even include whatever a man named Frank Herbert may have thought.

I've always appreciated the weirdness of David Lynch's Dune (although Jodorowsky's would have been even weirder), but it gets wrapped up in being a David Lynch movie and misses a lot of the depth of the story and the ideas (and what's up with those weirding modules?). The 2000 miniseries is okay and much closer to the plot, but falls a bit flat for me (and what's up with the Bene Gesserits' hats?).

But a filmmaker like Denis Villeneuve, in Arrival and Blade Runner 2049, has shown he can do both weirdness and depth, not to mention interesting characters and gorgeous eye candy. I have a ticket to see the new Dune later this week, and you don't have to be the Kwisatz Haderach to see that a review will appear on this blog soon after.

But even if Villeneuve's film is not great, Frank Herbert's books are always there waiting in those places few of us dare to look, gazing back at us from the heights of time, space, and imagination.

This and my previous review are also on Goodreads.