It’s been a good year for fans of science fiction on the large and small screens, aside from the death of Leonard Nimoy, of course.  It was a good year for movies in particular from the return of beloved franchises like Star Wars and Mad Max to new hits like The Martian and Ex Machina.

I've made lists of my favorites, my least favorites, and my "okays" in movies released in 2015.  They're in three separate lists: best good movies, worst bad movies, and most mediocre mediocre movies -- all in my opinion, of course!

I spent a lot of time at the movies this year, but I didn't see everything, so please feel free to give your recommendations in the comments for anything I missed (or to offer your rebuttal to my rankings).  I've limited myself to movies that I reviewed on the blog, so while Kung Fury was an insanely hilarious homage to the 1980's, Jurassic World was a lot of fun, Pixels was one of the worst movies ever made, I'm not including them.  I'm not discussing Avengers: Age of Ultron (which was fun) or other comic book movies (seriously, Ant Man?  Another Fantastic Four?).   I don't really like superheroes, and even if I did, the whole comic book movie genre has been completely over-saturated in recent years and is well covered elsewhere by almost every other nerd on the internet.

And now to the movies!

I've been trying to decide between Fury Road and The Force Awakens as my favorite movie of the year.  Both movies have ultra-competent female protagonists, although Fury Road could certainly have done better on the racial diversity front.  While Fury Road gives us pulse-quickening action and a fully realized post-apocalyptic world, Star Wars gives us all the fun of a real Star Wars movie.

The deciding factor is this: The Force Awakens is a really good Star Wars movie, whereas Mad Max: Fury Road is not only by far the best Mad Max movie, it's the best action movie I've ever seen.  Also, Fury Road has Furiosa (played brilliantly by Charlize Theron) and the Doof Warrior.  See my full review for more on the philosophical dimensions: "Fierce Furiosa and the Lessons of Dystopia."

As I noted in my non-spoilery non-review, the greatest thing about The Force Awakens is that, unlike the prequels, this feels like a Star Wars movie.  I'll write a full spoiler-mode review soon, but I agree with this piece by Aaron Bady that the problem with the prequels is that George Lucas tried to make Star Wars into Star Trek, whereas J. J. Abrams failed in the Star Trek reboots because he turned Star Trek into Star Wars.  Abrams wanted to make Star Wars all along.  And he did a great job of it, while delivering on his promise to include the kind of diversity we see here on Earth.  Also, you should see this in IMAX if you can.

Some curmudgeons have whined about the alleged unoriginality of The Force Awakens.  This misses the point on two counts.  First, Star Wars has been derivative from the very beginning.  Lucas's whole idea was to blend samurai movies, Westerns, and pulp space opera all in a Hero's Journey purée.  That Star Wars has become big enough to include itself in the list of influences is no surprise, and this is part of what makes this a Star Wars movie.  Second, while there are some similarities, the curmudgeons are overplaying them.  Rey and Luke are both desert-dwelling orphans answering the call of destiny, but they're also different in a lot of ways.  Also, Finn is an entirely new kind of Star Wars character who raises heretofore unrecognized philosophical issues about the Star Wars universe.

I'll say more on all of this in my spoiler-filled review coming soon.  In the meantime, I need to go see it for the fifth time...

Like the book, this movie is good for what it is: a kind of engineers' science fiction.  I also love the humor, although it's toned down a bit from the book.  There's not much philosophical depth here, but that just gives philosophically minded viewers something to add.  See my book and movie review.


Ex Machina is a good exploration of issues of consciousness (and makes references to Wittgenstein and Turing), but I have to admit that I think it's kind of overrated.  It devolves, in my opinion, to a boring sort of fear of technology and AI, not to mention the tired trope of the sexy lady robot.  This was well done, but I was hoping for more.

See my full review for more. 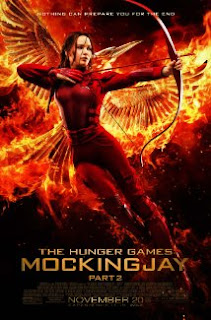 While I haven't read the books, I've always enjoyed The Hunger Games movies.  This is a nice wrap up to a series that has been a big part of making dystopia mainstream, and Jennifer Lawrence is amazing as always.  And of course there's the delightfully subversive message of these movies that we are the Capital.  See my review here.

Okay, this isn't a science fiction movie, but I allowed myself to sneak one horror movie on the list.  This isn't a great film, but it's pretty good.  Those ghosts sure are creepy and all the more so because they're used sparingly.  As I noted in my review, Crimson Peak asks: who are the real monsters?

This movie had a lot of potential to bring up intriguing issues of personal identity: if your mind were somehow transferred to a new body, would that really be "you"?  Could there be more than one person in a single body?

The result, however, was a big let down that deflated most of its philosophical potential.  On the other hand, it does give a nice representation of the Buddhist idea that our actions in service of an illusory self lead to suffering.  See my full review.

Another movie that ruined a good potential.  I didn't hate Tomorrowland the way most of the critics did.  Part of me liked it -- or wanted to like it, anyway -- as an answer to the gloomy dystopianism that has overtaken our culture as of late.  Unfortunately, it all just ended up being kind of lame.  See my review here.

The Mediocre (or, Movies I Know are Bad, but Can't Help Liking)

I can't entirely explain my love for Jupiter Ascending.  Maybe I just can't say no to the Wachowskis.  Maybe I just love the idea of an original big budget space opera.

Is this a good movie?  No, of course not.  Is it a lot of fun as an original space opera movie with lots of cool looking stuff?  Definitely!

I guess I understand why everyone hated this.  But I can't help it.  Arnold Schwarzenegger was a big part of my cinematic childhood, and it's great to see him back in the movies, cheesy one liners and all.  Philosophically, the Terminator series always brings up interesting issues about consciousness, freedom and determinism, and of course about the nature of time.

Genisys isn't on par with the first two Terminator movies, but I'd say it's a lot better than the third and fourth.  I wrote two posts on Genisys, which were my excuse to geek out on philosophy of time and the paradoxes of time travel in a way befitting any philosophy and science fiction blog: "Terminator Genisys: Part One: Is Time Travel Possible?"  and "Terminator Genisys: Part Two: Genisys is Not About Time Travel."

Yeah, yeah, I know Chappie is a bad movie by most cinematic standards, especially coming from the director of a modern classic like District 9, but I kind of liked it.  Maybe I just have a weakness for cute robots (BB-8 was one of my favorite things about The Force Awakens and I love Wall-E).  Maybe it's good to see an alternative to the idea that AI is coming to kill us.  Like Crimson Peak, one of the questions of Chappie is: who are the real monsters?  See my review of Chappie in a post called "Mini-Reviews of Unpopular Movies."
Posted by Ethan at 9:46:00 AM