Post-apocalyptic dystopian stories have been all the rage lately  (The Hunger Games, Mad Mad: Fury Road, etc.), but readers familiar with Adam J. Nicolai's other books will know to expect something beyond normal in any genre he works with whether it's ghost stories, demonic possession, or high fantasy.

(In the interests of full disclosure, I should mention that the author is a good friend of mine.  Let that influence how you take this review if you must, but I can say that I genuinely loved this book). 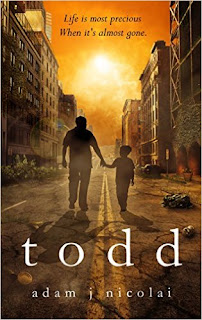 The mystery of Todd begins when almost all humans and animals abruptly disappear, all that is, except for Alan and his son Todd.  Things are creepy right away, and the creepiness increases exponentially as the novel goes on.

Alan’s inner monologue is great.  I feel like I really know him after reading this.  Too often characters in these types of stories turn into steely-eyed Rambo survivalists over night.  It’s nice to see someone with plenty of self-doubt, regret, and real fear.  It’s far more realistic, but then readers familiar with Nicolai's thorough characterization will not be surprised.  Fans of Stephen King will note King's pervasive influence on that count and many others.


It's also nice to see Alan use some critical thinking concepts and to teach these skills to his son.  To say much more about the plot will require spoilers, which I will get to at the end.

The Philosophy Report: The Dystopia of Death

If I had to name the philosophical theme of this book it would be: Death and value.  That is, how do we navigate questions of value and meaning given the inevitability of death?  Heavy stuff!  The whole thing is basically a metaphor for death; it's existentialism without all the snootiness.  Alan is thrust randomly into a seemingly hopeless and bleak situation with no real help.  The only thing that keeps him going is his relationship with Todd, and his depression and anger issues threaten to ruin even that.  Using the somewhat complicated father-son relationship to demonstrate the vital importance of relationships in human life works really well.  It reminds me of a quote from Carl Sagan’s Contact: “For small creatures such as we the vastness is bearable only through love.”

Nicolai fans will note that this is different than his other books.  It’s nice to see a fresh take on the whole dystopian thing.  Still, the depth of character development and parent-child relationships form a nice Nicolai brand along with Alex and Rebecca.  Children of a Broken Sky is probably the odd book out as a high fantasy, but it’s still part of the Nicolai brand with the characterization and all around coolness.

Todd is available on Amazon as of TODAY!

....  are you sure you noticed the SPOILER ALERT?


Okay, here are the SPOILERS!!!  The use of fundamentalist Christian Rapture imagery was a bit of a shock.  I was expecting something else: virus, zombies, etc.  But of course Nicolai goes in a direction with this imagery that would leave Left Behind fans scratching their heads if not denouncing it in anger.  I love the creepiness of the Blurs, the moss, and the sky worms.  The idea of a world-devouring entity is really cool.  It shows that the genre Nicolai takes on in this book looks like supernatural horror, but it's really Lovecraftian science fiction.  I’m reminded of the famous line from the Bhagavad Gītā about time/death, the destroyer of worlds (11:32), which was recited by Oppenheimer when the first atomic bomb was detonated).

End of the spoilers...