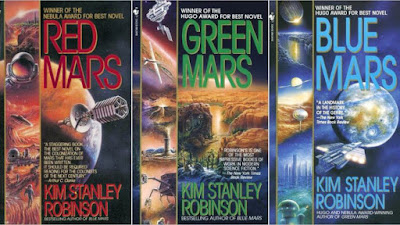 According to Variety, Kim Stanley Robinson's Mars Trilogy is coming to TV.  The Spike channel has ordered a 10-episode season with J. Michael Straczynski at the helm.  Stracynzski is the co-creator of Sense8 and the creator of Babylon 5.  If anyone can make a Mars Trilogy TV series that isn't completely watered down and lame, Straczynski can.

I'm a huge fan of Kim Stanley Robinson (KSR) and his Mars Trilogy (see my reviews of Green Mars and Blue Mars).  As for J. Michael Straczynski (JMS), I loved Sense8 and I've been slowly working my way through Babylon 5 (somehow I never got around to watching it in the 90's).  KSR and JMS may be a winning combination.

I don't do a lot of newsy type posts, but this has me excited, or at least cautiously optimistic.

My cautious optimism stems from JMS's deft and nuanced treatment of politics in Babylon 5 as well as his work with the Wachowskis on Sense8, which is a surprisingly deep meditation on altruism, diversity, and human nature.

It would be easy for a TV series to devolve into philosophically shallow "science the shit out of this" Engineers' SF, as in The Martian (see my review, which explains what I mean).  I wouldn't be surprised if the success of The Martian is a big reason that the Mars Trilogy is finally coming to the screen and The Martian is fun for what it is, but the Mars Trilogy is so much more than that.  Assuming Spike gives him the freedom he needs, I hope JMS will keep at least some of the depth of the trilogy in tact.

Many critics of the trilogy bemoan its overtly political hues (see, for instance, this Reddit on the subject).  Granted, if you don't like politics, you probably won't like these books.  Still, I think this criticism misses the point on two counts.  First, I can't imagine that human beings could go to Mars only to forget that we are, as Aristotle puts it, political animals.  Second, while the books do have strong political elements, there's so much more: there's plenty of deep thought on ecology, science, knowledge, human nature, etc.  To say that the Mars Trilogy is basically about politics would be like saying that Hamlet is mostly a ghost story.

Of course, a TV series, no matter how good, will never be the same as the novels.  It could never hope to capture the depth and nuance from the characters' inner monologues to the poetic descriptions of the Martian landscape.  There are things books can do that the medium of television could never hope to do.  The books are modern classics just as they are.  Nothing the TV series will do could ever change that.