Blue Mars confirms it: Kim Stanley Robinson's Mars Trilogy has ascended to my personal pantheon of science fiction series.  It's up there with Frank Herbert's Dune series, Isaac Asimov's Foundation series, Octavia Butler's Earthseed Duology, Ursula Le Guin's Hainish Cycle, and the Culture series of Iain M. Banks.  Like these other masterpieces, the Mars Trilogy is not just something you read, it's something you live, something that stays with you and changes you long after your eyes pass over the final sentences.

As I noted in my review of Green Mars, the genius of the trilogy is that Kim Stanley Robinson combines hard SF, literary writing, and philosophical rumination to produce something beautiful -- maybe even something as sublime as Mars itself! 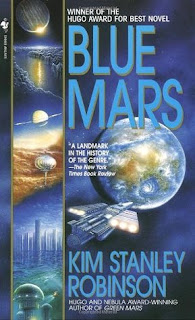 What to do once some of us have become Martian?  That's the question of Blue Mars.

This question has multiple dimensions: political, biological, ecological, cosmological, artistic, mathematical, sociological, philosophical.  The depth with which Kim Stanley Robinson (KSR) plumbs these dimensions is astounding.  I can't possibly do justice to this depth in one review.

Nor can I do justice to the literary beauty of KSR's prose.  Here are some of my favorite examples:


"But to some people home was home, a complex of feeling far beyond rationality, a sort of grid or gravitational field in which the personality itself took its geometrical shape.  While for others, a place was just a place, and the self free of all that, the same no matter where it was.  One kind lived in the Einsteinian curved space of home, the other in the Newtonian absolute space of the free self" (p. 196, page numbers from the 1996 hardcover edition).

"Over all this water great flocks of birds flew daily.  Clouds bloomed in the air and rushed off on the wind, dappling the white and red with their shadows" (p. 232).

"Nirgal floated over them, circling the bridge twice to marvel at the sight -- like nothing he had ever seen on Mars before: water, the sea, a whole future world" (p. 308).

"On the obsidian water of Kasei Fjord the stars rode up and down.  Mind and body full of feeling, sweet fatigue a state of grace" (p. 382).

"A farmer-tanned little bald wizened primate, like her image of Gandhi or Homo Habilis" (p. 417).

"... it does not seem possible; it was certainly not natural.  Yet here they were.  And now these little snow pika, happy in their oasis.  Not nature, not culture: just Mars" (p. 545).

"'Perhaps the combination should be called blue,' Ann said one evening, looking over the side at the water. 'Brown isn't very attractive, and it reeks of compromise.  Maybe we should be thinking of something entirely new'" (p. 584).

The plot also resists easy encapsulation.  While basic arc of the plot concerns the idea of being Martian, it seems more appropriate to talk about plots in the plural.  There's plenty of politics with the Reds, Greens, and others vying for influence while the ecological, economic, and political problems on Earth put pressure on Mars, especially concerning immigration.  There's a trip to Earth, and later a trip to Uranus and even a mention of a few trips to the stars, perhaps hinting at KSR's 2015 novel, Aurora (see my review).  One of my favorite chapters follows a character as he temporarily joins a group of people living as a band of hunter-gatherers (a seed for KSR's 2013 novel, Shaman?).

All of this takes place over a period of about 100 years.  Thanks to longevity treatments, the reader views most events through the First Hundred (the original Martian colonists from the early 21st century) and some of their decedents.

Perhaps the single most influential character of the series is one of the least present: Hiroko Ai, charismatic progenitor of the quasi-religious concept of Areophany.  In Blue Mars her fate is left unresolved while there continue to be alleged Hiroko sightings on Mars, Earth, and elsewhere throughout the solar system.  What does Hiroko represent?  The union of science and religion?  The transcendent divine feminine?  A role model that we might strive to emulate but never duplicate?

KSR's buffet of philosophical morsels could keep philosophically-minded people busy for decades.  How might space travel, colonization, and increased longevity change the human condition?  Is it morally permissible to change wild places like Mars to fit our human needs?  Will new contexts radically challenge the persistence of social arrangements like capitalism and patriarchy?  How does science as a practice of knowledge production change the universe and how does it change us?

Philosophically, the Mars Trilogy is the antithesis of the engineering-focused story of The Martian (see my review).  The Martian is what I call Engineers' SF.  The technical detail and hard SF aspects of the Mars Trilogy make it Engineers' SF in a sense, but this is merely part of its true identity as Big Ideas SF, placing it with such esteemed company as 2001: A Space Odyssey and Childhood's End.

I'll concentrate on two of the major philosophical issues: personal identity in light of the longevity treatments and the stasis and change of human nature in light of being Martian.

The longevity treatments become a handy plot device that allows KSR to tell a story that takes place over nearly 200 years; such treatments also raise the philosophical question of personal identity.  What makes you the same person over time?

Psychological continuity theories, such as John Locke's memory theory, are one type of popular answer to this question.  What makes you the same person today that you were ten years ago?  You remember being you ten years ago!

But what if you had to remember things that happened several decades ago, or 100, even 200 years ago?  And what if your memories themselves started to fade and mutate?  What if you started to experience déjà vu (or other Mars Trilogy versions: jamais vu or presque vu - French for "never seen" and "almost seen")?

This is precisely the situation of most of the First Hundred characters.  One character, Maya, even comes to have what she feels like are three different versions of herself, which echoes what philosophers call the problem of fission: what if there were multiple people with the same memories?

What about the idea that a person is individuated by a soul or some kind of spiritual essence?  Another character, Sax, ruminates,


"... the mind-body connection was so strong -- so strong that the distinction itself was probably false, a vestige of Cartesian metaphysics or earlier religious views of the soul.  Mind was one's body's life.  Memory was mind.  And so, by a simple transitive equation, memory equaled life.  So with memory gone, life was gone" (p. 535).

It is precisely this last point that makes the loss of memory so poignant for the characters of Blue Mars (much of the last third of the book is beautifully heartbreaking).  Is a 220 year old person the same as the 20 year old when the 220 year old loses the memories of the 20 year old?  As a character reflects,


"Layer on layer, life after life -- they had lived so long!  It was like reincarnation in a way, or eternal recurrence" (p. 472).

Could you lessen the impact of this issue by appealing the typical Buddhist view of personal identity?  Perhaps there simply is no self or essence over time, and, while we need conventional criteria for sorting out who's who, ultimately there is no person to be found.

This may make death slightly less terrifying.  Such comfort may be needed, because longevity is not, despite appearances, immortality:

A perennial fact of the human condition has been the realization that we are all going to die.  If we ever have longevity treatments, the question of how to deal with death will still be with us, but it may be asked in a different accent.  If the average life expectancy were to become two to three times as long as it is currently, how would this change humanity?  Would it create overpopulation?  Would it change our priorities?

One of the most brilliant ideas in Green Mars was that our pursuit of knowledge changes the universe, but that the universe also changes us.  I called this ecological epistemology, an idea that is further explored in Blue Mars.


"Mars is all a garden.  Earth too for that matter.  This is what humans have become.  So we have to think about gardening, about that level of responsibility to the land.  A human-Mars interface that does justice to both" (p. 72).

The areoformation of humanity leads to what the book calls Werteswandel, German for "mutation of values."  In particular, KSR envisions a shift away from capitalist economies and patriarchal social roles.  Is it too utopian to think that humans may someday live in more free and egalitarian societies like the Martian society depicted in the book?  Is it human nature that cuts us off from such utopian visions?

Unlike many postmodernists who deny the existence of any trans-cultural human nature or Enlightenment figures who claim to find a static, ahistorical human nature, the message of the Mars Trilogy represents a middle way between these extremes.  We are not, as the postmodernists seem to think, blank slates upon which anything we can imagine can be written; nor are we incapable of any change beyond the stratified and unhealthy social arrangements of any past or current age.

The Mars Trilogy shows that we can move beyond our social and personal poisons.  Not necessarily all at once, or without occasional periods of regression.  We may have "punctuated equilibrium, without the equilibrium" (p. 324).  But it could happen.  There is hope.

Herein lies KSR's utopian vision: Humans have a nature, but that nature can change over time.  Just what you'd expect for evolved and evolving creatures like us.