Review of The Book of Phoenix by Nnedi Okorafor 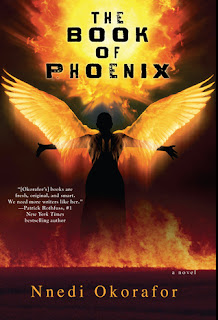 With some framing that connects this to the world of Who Fears Death, the plot of The Book of Phoenix focuses on young Phoenix who lives confined to the ominiously-yet-generically-titled Tower 7 in a future New York City that's partly underwater.  Phoenix is the result of genetic engineering on the part of Big Eye, a shadowy agency that seems to delight in ethically reprehensible treatment of their creations.

Phoenix's powers unfold as the story moves along.  Her powers initially include advanced maturation (she is two years old but looks 40) and the ability to generate tremendous heat from her skin.  The fact that her name is "Phoenix" may give some hints about her other powers (although it could also mean that she has a connection to the capital of Arizona).


Phoenix and her cadre of SpeciMen (sort of like X-Men without the benevolence of Professor X) eventually bust out and lead a rebellion.  This is a bit more complex than I just made it sound, especially because there's a long digression in Ghana and plenty of really weird and cool stuff along the way, not to mention Okorafor's prose, which is, with the exception of a few awkward stretches, smooth and engaging.  Okorafor's use of cultural and mythological elements from several different cultures in Nigeria, Ghana, Mali, Sudan, and elsewhere works well.  I especially liked the robotic anansi spiders.

When I refer to "weird" stuff, I'm not referring to those cultures (the mere inclusion of various cultures shouldn't be weird, contrary to the annoying yowling of the Sad and Rabid Puppies).  The delightfully weird parts of the book come from the science fictional/fantastic elements of Okorafor's imagination.  This book feels more science fictional than Who Fears Death, which felt more fantastic; Okorafor is definitely blending the two genres, and she seems to delight in the blurring.

Maybe this is just my science fiction loving heart, but I'm wondering if all the "fantastic" elements can really be explained scientifically even if this requires the alien stuff casually mentioned in the book.  Perhaps it's a case of Arthur C. Clarke's law that "any sufficiently advanced technology is indistinguishable from magic."

The Philosophy Report: Interpretation and Ethics

The framing story involves a man closer to the time and place of Who Fears Death who finds Phoenix's account.  This provides an interesting and somewhat surprising link to Who Fears Death, but I won't spoil that here (suffice it to say that it brings up a lot of issues of interpretation and the power of narrative).

I'm not quite clear when everything is supposed to take place, but there's a hint that the main story is set in about 100 years.  I'd like to think that racial and international relations will be significantly better than this by then, but maybe this just shows that I'm a naïve white American, or maybe the story is intended to function as a dystopian warning.

The ethical core of the novel is Big Eye's treatment of Phoenix and friends, and their response to this.  Big Eye is deplorable for sure, but we never get much insight into why they're doing this from their point of view, ethically dubious as it is.  Much like I asked in my review of Ursula Le Guin's The Word for World is Forest, do Phoenix and company do the right thing in their response?  This question is especially relevant considering the way Phoenix's legacy is taken up in the events leading up to Who Fears Death, but I'm trying to keep this review spoiler-free so I'd best stop here.