Like Avatar, but Not Stupid: The Word for World is Forest by Ursula K. Le Guin

Kinda like Avatar, but not stupid.
- My bumper sticker slogan for The Word for World is Forest 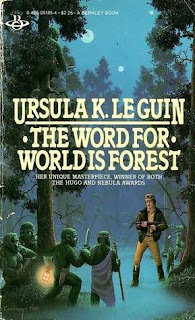 Okay, Ursula Le Guin's The Word for World is Forest is actually not that much like Avatar, but there are similarities.  Some militaristic Terrans come to steal resources from a forest planet inhabited by small, furry humanoids called Athsheans.  The Athsheans end up fighting the technologically superior but numerically inferior Terrans.  There's a Terran anthropologist who comes to almost understand the Athsheans (but he doesn't quite go full Avatar).

One of the villages of the furry guerrillas fighting an imperial power is called Endtor.  Maybe George Lucas owes Le Guin some royalties, not just James Cameron.

But as an American book published in 1972, the real background seems to be the war in Vietnam.  At one point one of the characters even alludes to the war for the sake of its historical lesson.  Le Guin has said in an interview that she doesn't create villains, but some of the Terrans here are unequivocally nasty.  One guy is even a white supremacist among Terrans in addition to hating the furry green Athsheans.  Does all of this represent the feeling of many Americans about the war in Vietnam, but cast onto a distant planet far into the future?


Another cool thing about this book is that it's part of the Hainish Cycle.  As I recently noted, this is one of my all time favorite science fiction series, a series that includes two of Le Guin's best known novels: The Left Hand of Darkness and The Dispossessed.  The larger interstellar political situation is at the periphery in The Word for World is Forest, but we do meet a few representatives from the other non-Terran human races of the League of All Worlds.

The Philosophy Report: Is Violence the Answer?

Philosophically, one might wonder: Did Selver, the Athshean instigator of the rebellion, do the right thing in using some rather extreme violence?  What does it say about the Terrans that most of them are such complete bastards to the Athsheans?  Why don't the Hainish do more to help?  What's going on with the dreaming business among the Athsheans?  What do the contrasts between the Terran and Athshean gender roles tell us?  What is the significance of the "gifts" between the Terrans and Athsheans mentioned at the end?  Is the story an allegory for the perils and benefits of cross-cultural interaction that could be instructive for all of us and in particular for people like me who engage in cross-cultural philosophy?

One of the things that makes this better than Avatar and (I hate to say it) Return of the Jedi is Le Guin's subtlety, not to mention her stylistic brilliance.  We don't get easy answers to these questions in her work anymore than we do in real life.  And that's why Le Guin remains one of my all time favorites.